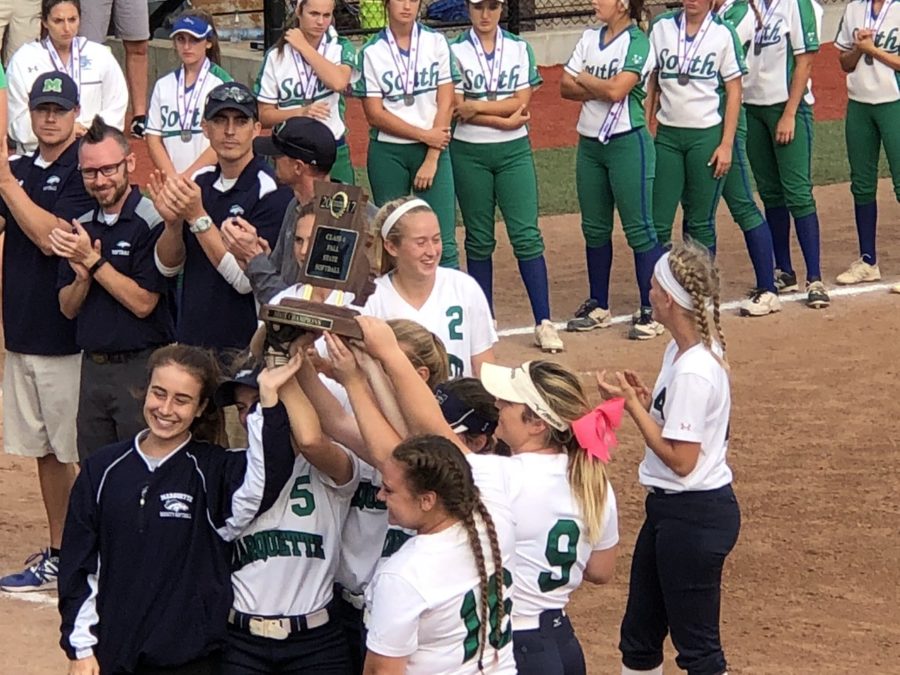 Kelsey Lenox, Lillie Knesel, Sydney Dana, seniors, and other members of the varsity Softball team hold up the State Title trophy. MHS beat Blue Springs South with a score of 2-0 to earn the title.

Bouncing back from last year’s second-place finish, girls’ softball has made yet another trip to the state finals. This time, however, the Mustangs came home state champions.

Annah Junge, junior, pitched a complete game in both the semi-final and the championship. “We’ve been working so hard all season,” said Junge after becoming state champions. “It’s what we wanted, so to accomplish it was really amazing.”

Junge pitched the entirety of both games at state, striking out 12 against Howell and another 8 in a one-hitter against Blue Springs South for the title.

But Junge says that it is was a team victory through and through.

“It was a team win for all of us. Everybody had a hand in it.”

The Mustangs struggled to start their game against Howell but a late game home run lifted the Mustangs.

“When Kelsey Lenox hit that home run, It was a huge confidence booster and we felt like we could win this game and go to the state final.”

Kelsey Lenox, senior, is the catcher for the Mustangs and had 0.333 batting average at state.

“To achieve our goal is really a dream come true. It’s an amazing feeling.” Lenox said. “Our team worked so hard all season.”

That hard work paid off as the softball team overcame significant deficits this past weekend.

“Every game we were having to come back,” Lenox said, “We really had to capitalize on big plays and just work through it.”

Coach Amy Doyle believes a lot of their success came through their level-headedness.

“The players stayed calm,” Doyle said. “Maintaining a consistent focus throughout the game made it easier for us to get back in it.”

The Mustangs couldn’t help but be happy following their state victory.

“The girls were so excited after the game. It was a huge accomplishment. To know that we set out to do something and that we got it done is awesome.” Doyle said.