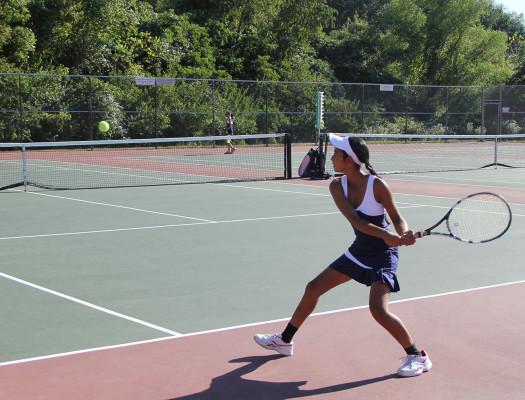 Since the age of 6, Trisha Sundaram freshman, found her passion: tennis.
“My mom was a top player in India,” Sundaram said. “She was number one in high school and college. She got me started.”
Sundaram said over the summer she played in a national tournament in India for three months where she ultimately won second place. More recently, Sundaram competed in a national tennis tournament in Lexington, Kentucky, over Labor Day weekend.
“I got second to a girl I have already beat five times,” Sundaram said.
Sundaram’s achievements have her currently ranked number one in Missouri Valley and 81 nationally. And as of Sunday, September 8, Sundaram is undefeated in singles for varsity tennis.
“I prefer singles because all the pressure is on me and I won’t have the pressure of letting my partner down,” Sundaram said. “I’m more of a consistent player, but when needed, I will play more aggressively.”
When preparing for a match, Sundaram said she visualizes her winning a match, prays, stretches and gets pumped up. During the match, she tries to identify her opponent’s weaknesses. After a match, Sundaram stretches to prevent injuries and if she loses, she reviews the match with her mom and dad.
Not only does she have her mom for inspiration, but Sundaram said one of the most inspirational tennis players is Arthur Ashe.
“Arthur Ashe was the first African American to win a grand slam,” Sundaram said. “I remember him during a match when I need inspiration.”
Senior Rachel Moentmann, varsity tennis player, said Sundaram will go far this season.
“I would describe her as she gets in people’s heads and makes people crack,” Moentmann said. “For Trisha, she is definitely going to state.”
Varsity tennis coach Matt Del Pizzo, social studies teacher, shares the same hopes as Moentmann.
“Baring injuring, she has a very good chance of making it to state,” Del Pizzo said. “She has a great personality, very humble, and she is a great contributor to the team.”
Del Pizzo said Sundaram has a complete game because she can use power, but then she has the ability to slow down the pace.
On Wednesday, September 4, Del Pizzo said Sundaram played a big match against Kirkwood. Sundaram played against one of the best players in the state and Midwest, and she came out on top. Del Pizzo said this big victory sets the stage for the rest of the season and makes Sundaram a top player.
“It’s a very humbling sport,” Sundaram said. “I don’t expect to win. My dream is to go to Stanford or another top ten school.