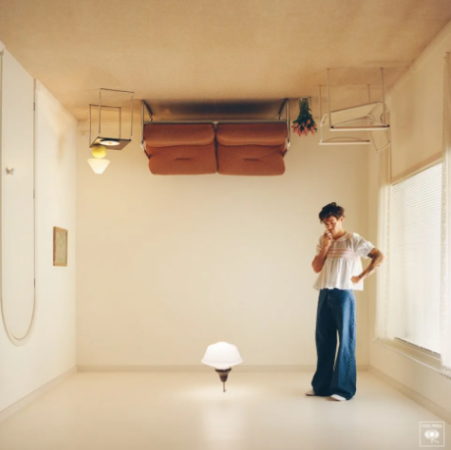 Harry welcomes us into his house with open arms and eases our worries about our past, relationships and the future.

The eclectic influence of the album can be seen in his songs “Grapejuice,” “Cinema,” “As It Was” and “Daydreaming,” specifically. These songs are a nod to the pop music of the 70s with beats that emulate the disco scene of the time.

Songs such as “Late Night Talking,” “Keep Driving” and “Satellite” bring a freshness to the album. While these songs lack lyrical depth and substance, their fast-paced nature make them the perfect songs for the summertime.

This album seems focused on production and aesthetics rather than songwriting, which is disappointing as a fan. Styles’ past two albums were lyrically strong, powerful and insightful, whereas this album has less of that lyricism and more feel-good songs.

Prior to its release, I predicted this album would be an indie album, and my prediction holds true to some degree. Songs like “Grapejuice” and “Keep Driving” definitely check that box, but the remainder of the album is for the most part, pop.

However, Styles does throw in a few slow ballads.

“You don’t have to be sorry for leaving and growing up,” sings Styles on “Matilda,” a song chronicling a young girl with a troubled home life, which is my personal favorite off the album, simply because of the relatability.

“Love of My Life,” “Boyfriends” and “Little Freak” are similarly touching but concern romantic relationships instead of familial ones.

Despite being sonically adventurous, the album still has its flaws, and they come in the form of “Music For A Sushi Restaurant.” Being the first song on the album, I expected Styles to open with something more evocative of the album as a whole, not elevator music.

Aside from that outlier, the album is cohesive, which earns it a 8.5/10. Harry welcomes us into his house with open arms and eases our worries about our past, relationships and the future.