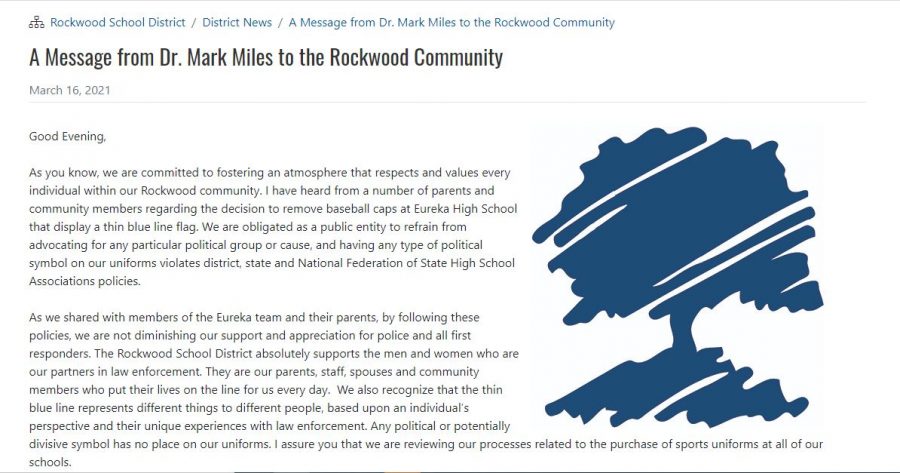 On Tuesday, March 16, Superintendent Mark Miles sent out this message to the Rockwood community regarding Eureka’s baseball uniform decision.

“We are obligated as a public entity to refrain from advocating for any particular political group or cause, and having any type of political symbol on our uniforms violates district, state and National Federation of State High School Associations policies,”  Dr. Miles said.

The only exception to this rule would be if the Missouri State High School Activities Association (MSHSAA) were to allow for a “special occasion, commemorative or memorial” patch, which they haven’t, according to the handbook.

We commend RSD’s choice to retract the baseball cap distribution and uphold district policy and abide by NFHS rules. No matter what the message is, teams simply cannot wear items that break NFHS rules.

On social media, members of  the community have called the act a form of censorship. However, RSD is not stopping individuals from wearing the symbol at school, they are just making sure that a “political and potentially divisive symbol” isn’t being supported by a school organization.

Dr. Miles referred to the flag as one with “thin blue line[s],” yet we commonly know it to symbolize the Blue Lives Matter movement, a countermovement to the Black Lives Matter movement, which strives to recognize the systemic injustices of police brutality against people of color, especially Black Americans, according to the Marshall Project.

Police brutality may not be concentrated to one year, but Americans witnessed a great amount of social upheaval and racial unrest following the death of George Floyd last May and Breonna Taylor last March, only to name a few. In addition, the thin blue line flag made its way to the riots at the Capitol this past January

As can be seen by historical events, the flag may hold negative sentiments to a population of RSD. About 7.9 percent of the RSD student population is Black and 24.3 percent is made up of people of color (POC) according to the Department of Secondary Education’s (DESE) district demographic data as of 2020. By discontinuing the use of these baseball hats, RSD may minimize harm and offense to marginalized groups and ensure a safe environment for all of its students.

As Dr. Miles wrote in the message, we as students are looking to RSD “to set an example and advocate for a welcoming environment for all perspectives.”