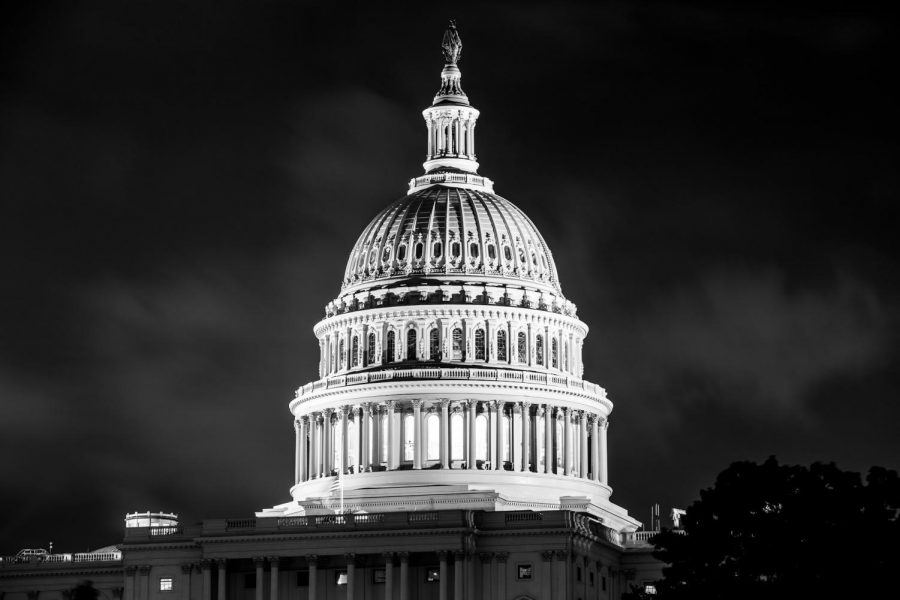 Media by Cameron Smith on Unsplash

America faced one of its darkest days in its history of domestic terrorism Wednesday Jan. 6, as the darkest aspects of society and the Trump presidency were brought out of the shadows and onto Capitol Hill.

A void opened in me watching the deadly invasion of the U.S. Capitol as far-right, pro-Trump rioters and militia stormed the cradle of American democracy, Wednesday, Jan. 6.

This was more than an attempt to disrupt Congress members’ count of Electoral College votes. It was to interfere with the peaceful transfer of power and undermine democratic processes.

This unprecedented act of terrorism was marked by a mob of insurrectionists and white supremacists who vandalized halls, looted objects, broke windows and allowed a Confederate flag to be paraded around the U.S. Capitol.

A sea of hateful symbols outside the building, where rioters set up a noose, wore anti-semitic attire and waved ‘blue lives matter’ flags, drowned my heart and spirit.

The mob proudly carried U.S. flags because this represents the raw state of America: a  shameful, broken society, dismantled by Trumpism, festering with hate and racism and failing to uphold an already fractured sense of integrity and democracy against its own citizens.

This travesty marks a future precedent either for the downfall of American democratic integrity or President Trump and his Republican enablers, who spread baseless claims of election fraud for weeks and inciting a riot.

America is operating in the way it was founded—on ideals allowing a white majority to dominate with incontestable privilege, power and a lack of protection for the rest of those not referred to in the preamble of the Declaration of Independence.

Unlike the terrorist attacks of September 11, 2001, Americans must digest the fact that this attack was conducted by their own neighbors, enemies to their own nation. The siege of the Capitol was not shocking if the weeks of attempts to undermine the integrity of the election results by Trump and other Republican-elected officials are taken into account.

In a “Save America” rally Wednesday against the congressional certification of Joe Biden outside of the White House, Trump urged the crowd to storm to the Capitol as he said his supporters will never take back the country with weakness. The president continuously incited this attack with statements such as “We will never concede” and “We will stop the steal.”

The stark difference in the president’s comments toward rioters and the law enforcement response displayed a double standard: the rhetoric, treatment and threat perception of demonstrators in the U.S. is dependent on the racial diversity of the crowd.

The stark difference in the president’s comments toward rioters and the law enforcement response displayed a double standard: the rhetoric, treatment and threat perception of demonstrators in the U.S. is dependent on the racial diversity of the crowd. ”

Trump referred to the riotous mob as “great patriots” and said “We love you. You’re very special…I know how you feel” in a statement Wednesday. Yet, his word choice for largely nonviolent Black Lives Matter protesters in summer protests included “thugs,” “terrorists,” “anarchists” and “violent demonstrators with evil intentions.”

For months, peaceful protestors advocating against police brutality and racial injustice were met with militarized law enforcement, rubber bullets, tear gas and pepper spray that some investigations of police departments found to be excessive uses of force.

National Guard troops lined steps of the Lincoln Memorial when Black Lives Matter demonstrators protested in Washington D.C. in June to protect a symbol of our democracy; however, Capitol police allowed a mostly white mob to spray chemical agents, jump barricades, sit in lawmakers offices and largely walk away—possibly with a souvenir selfie with officers.

As a Black female, I do not have the privilege to embrace the American flag when police appeased insurrectionists on Capitol Hill. Their violent displays of white anger, which are rooted in a racist legacy and a perceived loss of white power, are seen as a historical norm.

Trump, although he has called for a “seamless transition of power,” is unfit to continue to serve until Inauguration Day, which he selfishly and unpatriotically will not attend. I stand with members of Congress who support clearly condemning the actions of Trump and the mob he incited that served as a direct threat to our country and rule of law.

Elected officials must attempt to immediately pursue impeachment, investigate and punish rioters and hold Capitol police accountable if Americans intend to save the nation from itself and preserve democracy from the inevitable mayhem to come.