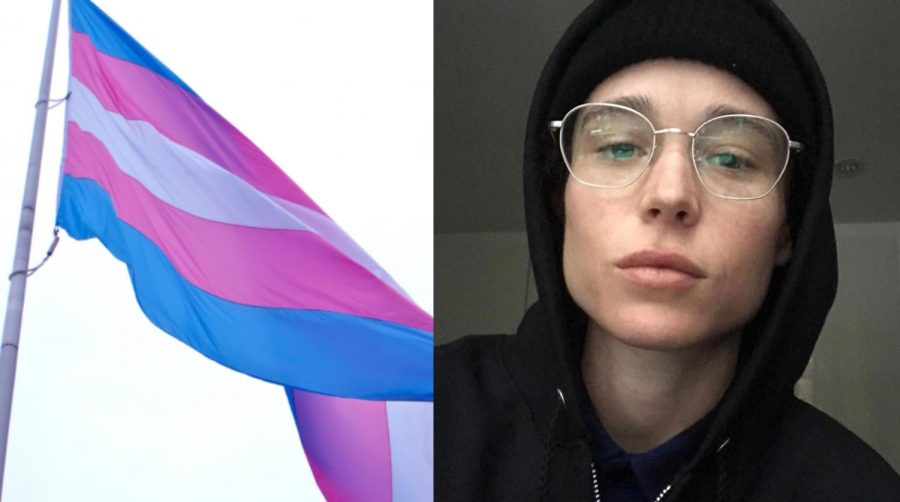 Elliot Page, Oscar-nominated Canadian actor, came out as a transmasculine person earlier this month stating that they use he/him and they/them pronouns. Page has already been a powerful force among LGBTQ+ celebrity voices and was previously one of the most famous lesbian actresses in Hollywood history.

“Whenever a trans individual gets deadnamed, it tends to really hurt,” Samir Faruq, junior, said. “It feels like a punch to the gut. It feels like you’re being hollowed out.”

Faruq came out as identifying with he/him pronouns his freshman year of high school.

When Elliot Page, Oscar-nominated Canadian actor, came out as a transmasculine person earlier this month stating that they use he/him and they/them pronouns, Faruq was delighted.

Page has already been a powerful force among LGBTQ+ celebrity voices and was previously one of the most famous lesbian actresses in Hollywood history.

You’ve likely seen Page in hit movies like “Inception” and “Juno” or in one of Netflix’s most successful original shows, “The Umbrella Academy.”

Faruq said he was glad to see Page come out, especially because Hollywood representation of trans individuals is limited.

“It’s so cool that there is such a popular person representing trans individuals in the media,” Faruq said. “Honestly, I do not think I can name a single other trans celebrity as big as Elliot Page.”

However, not everyone shares Faruq’s beliefs.

Despite stories still coming out daily about their announcement, the transgender community actively celebrating them on social media and allies speaking up to spark a larger conversation about acceptance, I constantly see people still misgendering and deadnaming Page.

Reactions to Page coming out from fellow celebrities and fans has been overwhelmingly positive, but did not come without a fair share of hate.

With a quick scroll through Page’s recent posts, you’ll see angry self-proclaimed “ex-fans” attacking Page in the comments with statements ranging from censored slurs to bluntly telling Page they will never be a man.

Perhaps their intolerance for Page could be explained by the fact that, for many, Page is likely one of the very first transmasculine celebrities they’ve ever seen.

Faruq said, while there are a few notable transgender female celebrities like Laverne Cox and Caitlyn Jenner, he has seen much less representation for trans non-binary and transmasculine people than for transfeminine people.

Representation is important not only because it shows trans youth that there are successful people like them in popular media, but also because it shows cis people that trans people are not an unseen and small part of the population.

As a cis person, I have never experienced gender dysphoria and I likely will never experience it during my life. However, as a passionate LGBTQ+ advocate and staunch supporter of LGBTQ+ representation, I understand the importance of using my privilege to speak out and support trans voices.

Looking through the comments under Page’s recent posts, it is all too clear that too many cis people do not understand the crucial difference between sex and gender.

“Sex is generally what you are born with, while gender is rooted in your brain,” Faruq said. “It’s on a spectrum, and people can be fluid. [Cis] people need to understand we do not just wake up one day and decide to want to be a different gender. In reality, we think about it for a very long time and experience a lot of gender dysphoria and euphoria before we come out.”

The significance of Page coming out as a transmasculine person lies in the fact that they are already one of the most beloved celebrities in Hollywood.

Hunter Schafer. Bridgette Lundy-Paine. Lachlan Watson. These are all trans or nonbinary celebrities who have inspired me to do my research about what it means to be trans or nonbinary and my responsibility as a cis person to educate other cis people.

Page may very likely be the celebrity that inspires someone to do their research and educate themselves too. Or, they may be the celebrity that inspires someone to become an ally and learn more about the LGBTQ+ community. Commenters can argue back and forth all day, but what really matters is that Page coming out started a conversation — a long-overdue conversation we must continue to have.

By no means am I a perfect or even near-perfect ally. But I stand with the trans community strongly enough to understand that being a strong cis ally is educating myself and others.

Being a strong ally is uplifting trans voices.

Being a strong ally is continuing the conversation about transphobia and acceptance.

Being a strong ally is making the world a more accepting place for transgender individuals to live in as authentically their true selves.