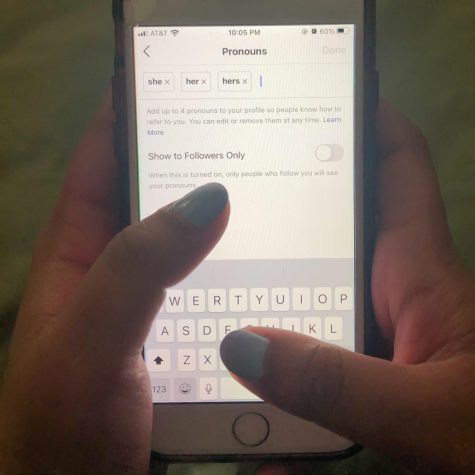 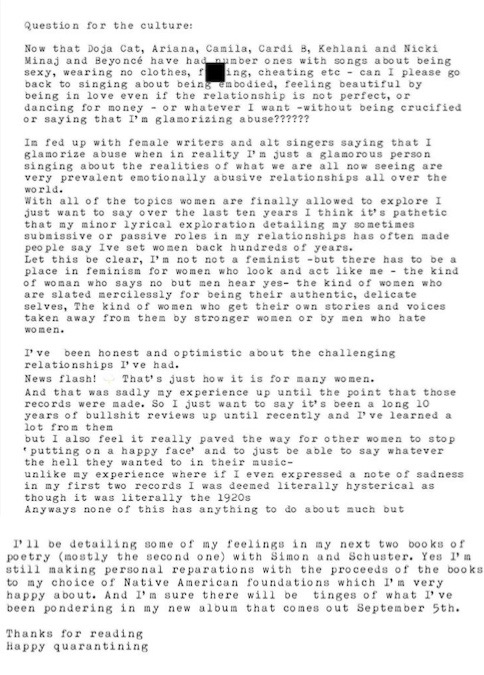 The first open letter was posted to Instagram by Lana Del Rey on May 21st.

Rey starts the letter by naming popular female artists such as Doja Cat, Ariana Grande, Camila Cabello, Cardi B, Kehlani, Nicki Minaj and Beyoncé. She writes that if those women can have number ones while singing about explicit topics, then she should be able to do the same.

Rey’s music often centers around topics such as drugs, abuse, love, sex and money. In her letter, she touches on how she has received backlash from the media for singing about such topics for the past 15 years.

Rey goes on to say, “let this be clear, I’m not not a feminist – but there has to be a place in feminism for women who look and act like me.” She then ends the letter by stating that she will talk more on this subject in her poetry books and her “White Hot Forever” album, which will be released on Sept. 5th.

Saying that she is a feminist holds no weight — she has already invalidated multiple women’s success and struggles. A feminist supports other women, not tear them down.

The point Rey was trying to make was a valid one; however, it was poorly executed. Rather than mentioning other female artists, Rey should’ve only discussed her own struggles and how they’ve impacted her music and career.

I’m not not a feminist – but there has to be a place in feminism for women who look and act like me.”

As a fan of Lana’s music, this came as a shock. She constantly preaches uplifting women and the new wave of feminism her fans should support. However, this letter undercuts any positive feminist message she has ever made.

The fact that the majority of the women she named were women of color did not help her case at all.

Lana, as a white woman, has not had to face the same intersectional challenges as them. She has not been under-recognized, discredited or pitted against other female artists like the women she mentioned have. Therefore, Rey making it seem as though her struggle is a singular one is wrong.

The women of color in her letter have all had to deal with both sexism and racism in the industry and in the public eye. The 2016 “The Power 100” list created by Billboard to recognize the most powerful artists of the year consisted of only 10 percent women, and only two out of the 100 were women of color. Rey was on that list, but none of the women of color she mentioned were.

Then, in 2017, when Cardi B started to gain popularity, the internet was quick to “cancel” Nicki Minaj by pitting her against a fellow female rapper. Since then, Minaj seems to constantly fight for her spot in the industry, despite being a major part of it for 12 years and paving the way for female artists in the rap genre.

The first letter caused a social media frenzy and the “#LanaIsCanceled” hashtag began trending. After seeing this, Rey posted an Instagram video with the caption “#f***off,” geared toward everyone calling her out.

Then, as a form of damage control, Rey posted another open letter on Friday, May 22.

She starts off the second letter by saying her “controversial” post was not controversial and that she stands by everything she said.

“I’m sorry that the folks who I can only assume are super Trump/Pence supporters or hyper liberals or flip-flopping headline-grabbing critics can’t read and want to make it a race war,” Rey said.

The second letter completely obliterated any point she tried to make in the first one. Saying that the millions of people holding her accountable are wrong rather than taking responsibility and clarifying her point makes her look ignorant.

Then, on Sunday, May 24, Rey posted a six-minute long video via IGTV.

The video was the last Rey spoke on the matter.

All of the statements Rey made contradicted each other and everything she claims to stand for. She claims to be a feminist, yet she invalidated the achievements and struggles of multiple female artists to make hers seem worse. She claims it wasn’t race-related, yet only mentioned women of color

As a 34-year-old woman with a following mostly made up of impressionable young women, Rey should’ve done better. Rey is setting the wrong example for her audience.

Rey should be teaching her fans to support each other and represent the new wave of feminism she is always pushing for. She should use the influence and privilege she has for good rather than to spread hate and negativity in an already sexist and racist industry. 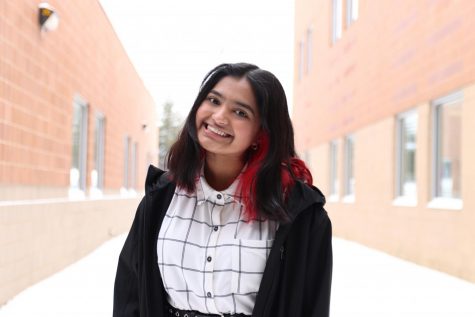