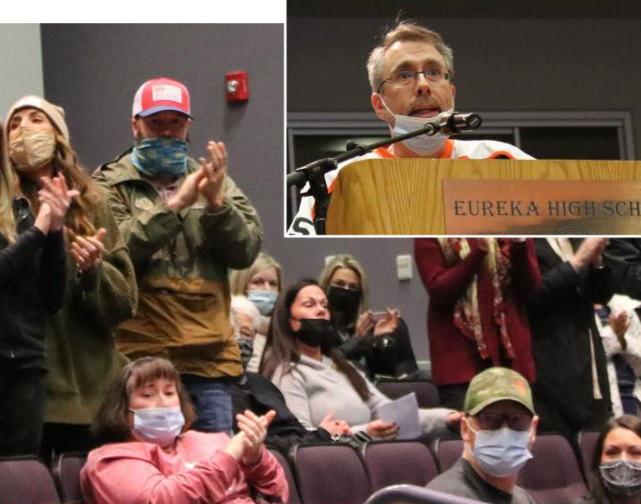 At the Thursday, Nov. 18, Board of Education (BOE) meeting, parents attended to voice their concerns regarding a variety of topics. A few parents applauded at the close of each comment. Jason Moore, RSD parent, spoke up about his dislike of the materials being taught at schools. “I did not feel comfortable reading what I saw,” Moore said at the meeting. “Rethink how this district is being led.” (Media by Marin Ellington (she/her))

At the Thursday, Nov. 18, Board of Education (BOE) meeting, parents attended to voice their concerns regarding a variety of topics. A few parents applauded at the close of each comment. Jason Moore, RSD parent, spoke up about his dislike of the materials being taught at schools. “I did not feel comfortable reading what I saw,” Moore said at the meeting. “Rethink how this district is being led.”

Parents have put several books in RSD school libraries under official review, claiming they contain pornography and references to violence and drugs

Since the start of the semester, 12 library books have been challenged at the district level by students’ parents under various concerns including language, drugs, sexual content, LBTQ+ representation, violence and police brutality.

“It’s interesting because there are lots of different reasons why people challenge books, so there’s never really a complete pattern to it,” Dr. Willott, RSD director of curriculum, said. “Everyone’s a little bit different, and it just depends on that person’s perspective and what they believe about that piece of material.”

Dr. Willott said there have been more book challenges this semester than her entire eight years in RSD. Notably, none of these books are required reading but rather they are books available to students in the library.

As of Dec. 15, three committees have chosen to “retain without restriction.”

During the Nov.18 Board of Education meeting, several parents were given the opportunity to voice their concerns regarding the process of challenging books and the books themselves.

Christian Eldridge, RSD parent, said that she was concerned about the content of the books available to students in libraries, specifically those with pornography and sexual content.

“It represents an alarming agenda that targets youth hiding behind virtuous words such as diversity and inclusion,” Eldridge said. “Of course, we must welcome children of all identities into our libraries and there are plenty of books that do that. What I am deeply concerned about is the large number of books sitting on our library shelves with the agenda of sexually ruining our children.”

Later, Janet Egrid, RSD parent, said that she had previously brought her concerns regarding certain books to RSD but was displeased with RSD’s response.

“I expected that we would receive notes back thanking us for alerting the district that these books are on Rockwood shelves,” Egrid said. “Nope. What we got were notes saying that if we don’t like a book we can challenge it. We just learned that if we challenge a high school book,  the review panel will bring in students, the very people we are trying to protect.”

Brittany Sharitz, librarian, said none of the book challenges have come from MHS parents.

“These challenges have all been from parents who have students at different levels,” Sharitz said. “But I think those parents are just looking ahead and thinking about when their students will become high school age, what they’ll have access to.”

Sharitz is on the book challenge committee that reviews “Crank” by Ellen Hopkins and “Looking For Alaska” by John Green.

While Sharitz understands that having multiple perspectives and dialogue over the library books is important, she said if students are ever bothered by content they find, they can choose not to read it.

“Librarians know that not all books are intended for every reader, but we also strive to meet the needs of a very diverse group of students. The maturity, interests and life experiences of students can vary greatly,” Sharitz said. “Content that seems too mature for some students could actually reflect the experiences of others and provide comfort in troubling times.”

Sharitz said librarians consider the merits of a book during the purchasing process, and thus, she does not think books should be banned. Sharitz is a trained professional with 12 years of teaching experience and completed a 42 credit hour master’s program in order to become a librarian.

“We definitely make judgment calls on what is appropriate and what isn’t appropriate for school libraries,” Sharitz said. “We’re using discretion to decide what should be in here and what shouldn’t.“

Aadhya Subhash, senior, talked about the issue of banning books from school during an AP Literature discussion for “Native Son” by Richard Wright.

“One of the best things about reading books that do contain sensitive topics is we’re being exposed to problems that really do affect real-world situations,” Subhash said. “Rather than being sheltered by it, it’s better to receive a formal education like this, so we’re not just navigating through this in our home, but with the help of teachers and other educational material.”

Subhash said parents may be concerned that books with violence or sensitive topics such as assault or drug usage have a negative impact on their child.

“I think parents can obviously restrict what books they want their children to read, but they shouldn’t restrict them from everyone else,” Subhash said.

One of the 12 books being challenged in RSD is “Heroine” by Mindy McGinnis. McGinnis spoke to students at MHS earlier this year about the inspiration for her novel.

One reason parents in the district have requested this book to be removed from school libraries is that “the content of the book is inappropriate for children of school age through twelfth grade.”

McGinnis, however, said it is a relevant and appropriate topic. According to the CDC, heroin use more than doubled among young adults ages 18–25 in the past decade.

“Real talk has to happen with teens about drug abuse, prescription drug misuse, and the very real dangers of casual drug use before they turn 18, exactly the period of time and the window of opportunity that the statement would deny,” McGinnis said.

“It’s a black mark, a patina of shame,” McGinnis said. “It tells kids who are dealing with these topics – whatever they are – in their daily lives, that they are wrong, shameful and dirty. This does not encourage anyone to speak up or seek help. It encourages them to keep their heads down, bury pain and live in emotional isolation as they pretend to fit in, be normal and abide by a social code that others have pushed upon them.”

While McGinnis said all voices should be heard and that she understands parental concerns, she asks adults to trust educators, librarians and other institutions.

McGinnis said her book is targeted to all individuals seeking empathy and compassion.

“Anyone hoping to be understood,” McGinnis said. “Anyone wondering how easy it is to fall down a rabbit hole, and anyone who has ever considered the fact that it could be them one day.”

Laura Saggar, RSD parent, is part of the committee in charge of challenging “Heroine.” As president of Wildwood Middle School’s PTO, Saggar was asked to join the committee as a parent leader in the district.

“Books are windows into how other people live,” Saggar said. “In ‘Heroine’, readers get to see the thought process of someone who may be becoming an addict. It’s an important perspective they probably would have never considered before.”

Saggar said the value in students reading such books is that they may spark discussion with their parents and other trusted adults. Rather than glorifying drug usage, she said, “Heroine” tells a story that warns students of the dangers of drug addiction.

Saggar said she thinks the core of the controversy surrounding the challenging of certain books is the modern political climate as misconceptions about public school.

Despite the controversy, she said she appreciates the willingness and involvement of parents to want to do what is best for their child’s education.

“No matter what rumors people may hear, Rockwood is one of the best districts in Missouri for a reason,” Saggar said. “We cannot afford to be so divided, we must be together as team Rockwood; that is what is best for our kids at the end of the day.

For the full interview visit here. 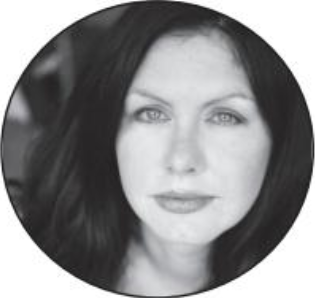 Q: What audiences do you think your book Heroin is “appropriate” for?
A: “Humans. Anyone looking for empathy and compassion in the world. Anyone hoping to be understood. Anyone wondering how easy it is to fall down a rabbit hole, and anyone who has ever considered the fact that it could be them one day.”
Q: What power should parents have in censoring the reading of high schoolers beyond their own child?
A: “My honest answer is that adults need to trust educators, librarians, and other institutions. Junior Library Guild, Kirkus, Horn Book, and other professional review sites assign age categories to young adult books. But more importantly – trust the readers themselves. I worked in a high school library for fourteen years. Teens and young readers DO self-censor. I’ve seen plenty of kids pick up a book, page through it, and be like, “Woah! Okay… not for me.” They put it down. They move on.”
Q: Who do you think should be responsible for decisions regarding banning books?
A: “I think most schools have a great process for dealing with challenged books. Of course, all voices should be heard. Parents have real concerns about what their children are exposed to, and raising their children is their most important job. Listening is also critical, and in a time when most public discourse has been demeaned to slugging matches where the winner has the best one-liner and everyone has a pie chart to refute someone else’s bar graph, actually being quiet and considering the other person’s point no longer seems essential to arriving at a decision. That’s what I would ask – that everyone let everyone speak, and then actually think about what they said, not just reload the next quip.”
Leave a Comment