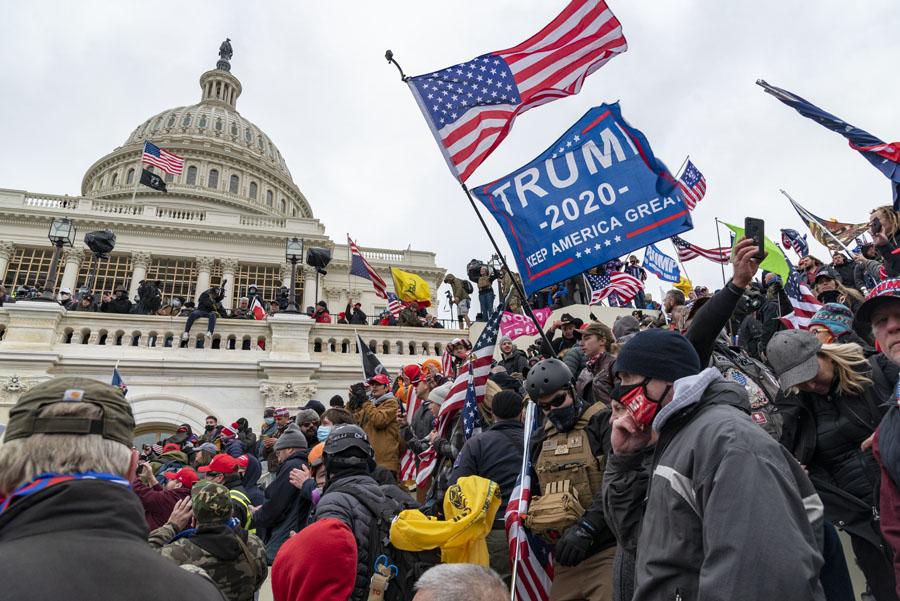 The protest at the U.S. Capitol Wednesday, Jan. 6, obstructed the ceremonial counting of electoral votes that would declare Joe Biden the winner of the presidential election.

Pro-Trump demonstrators broke into the Capitol building, causing the House and Senate floors to be evacuated and halting the counting of the votes. Following the incident, Facebook and Twitter froze President Donald Trump’s social media accounts after he had posted messages on both platforms that appeared to promote the Capitol protest.

Since the incident, MHS students have been discussing their views on what happened. The Messenger interviewed three students from across the political spectrum to hear their perspective on the historic event.

View from the Right

While he believes people have the right to protest, Ryan Mittanck, junior, said the incident at the Capitol was not just a protest—it had turned into a riot.

With the videos of people breaking windows and damaging the building, Mittanck said the event was chaotic.

Mittanck, who generally considers himself to be right-leaning, said the incident at the Capitol building got out of hand and choosing to break into the building was not a way to voice an opinion.

Although Mittanck does not support the storming of the Capitol building, he said it was wrong for social media platforms to censor the president.

“I don’t agree with everything he says, but he has just as much right to say what he thinks as everyone else,” Mittanck said. “There are definitely people on social media who have gotten away with saying much worse.”

There were pictures of authorities gradually showing protestors out of the building, taking down barricades and even taking selfies with protesters; whereas, during the months of the BLM protests, there were more than 950 incidents of police brutality, according to an article by USA TODAY.

Mittanck said there were differences in the way things were handled, but it cannot necessarily be blamed on race alone. There can be a variety of reasons, he said, like the individual officers present and the amount of protesters or officers.

View from the Middle

These pictures—a man in a Viking helmet in the House of Representatives, random people sitting at House Speaker Nancy Pelosi’s desk, a person taking the Speaker’s podium—Gleason could only describe as simultaneously hilarious and horrifying.

“It almost felt like a reality show, somehow removed from our actual lives,” Gleason said. “I mean, they look like bad Photoshop jobs you’d see in an Instagram meme.”

Gleason, who describes himself as a centrist on the political spectrum, said he attributes the incident at the Capitol to an insane depiction of what misinformation can do.

Biden truly won the election, Gleason said, but because protesters thought Trump was the rightful winner of the presidency, they were willing to fight and even risk their lives for a cause due to pure misinformation.

From Gleason’s perspective, breaking into the Capitol building and into legislative chambers could be construed as a coup, which is a level of protest that could be used for real issues.

“The Capitol protests were a dark day for democracy in the U.S., but at the same time, the most pure expression of democracy,” Gleason said. “People standing up and fighting for what they believe in is a core value of America. It’s just sad that this is what they fought for.”

Comparing what occurred on Capitol Hill to BLM protests last year, Gleason said there was a difference in how both protests were handled, but the impact of the difference may be a little overstated.

He said he doesn’t think the outcome would’ve differed even if those who engaged in the protest were of another race. The BLM protests caused more damage in terms of cost, Gleason said, but the Capitol protest had a greater significance in that the building has a sacred aspect to it, so judging which event called for a greater response is difficult.

Gleason said the Capitol situation was diffused by authorities relatively well as he understands the hesitancy of the D.C. mayor to approve shooting people at the Capitol building.

At the end of the day, Congress was able to reconvene and finish counting electoral votes, which is what Gleason said really matters.

View from the Left

A trifecta of anger, sadness and frustration built up in Mireya Rajendran, sophomore, after hearing about the Capitol protests, an act Rajendran considers to be terrorism.

Rajendran, a self-identified liberal, said the incident was violent and specifically targeted the U.S. Capitol building and  government. She said the incident at the Capitol appeared as if people were starting to promote dictatorship by protesting democratic processes.

“I’m shocked that people felt the need to protest the outcome of an election and the president is supporting the protestors instead of accepting his loss,” Rajendran said. “Calling the election a fraudulent election, blaming Democrats and the recent protests have only served to further politically divide our country in the middle of a pandemic.”

If any minority group committed the same violent acts at the sacred U.S. Capitol, they would not go unpunished, would be treated as terrorists and would face far more severe consequences.”

What Rajendran said upset her further was that President Trump didn’t condemn the actions of protestors, but had been issuing messages that continued to push the idea that he won the election.

Because of this, she said it was right for social media platforms to block the president from releasing messages because he would’ve made the situation worse.

Rajendran said the protesters are hypocritical about their use of violent protesting. She said many of them spoke out against BLM protests last year, but pretended they had the authority to violently riot.

The events were different, Rajendran said. BLM protests justifiably demanded reform as a response to the killing of black people by police, she said, whereas the Capitol protest was in response to a fair loss and was unnecessarily violent.

Additionally, Rajendran said the treatment of protesters by authorities was different in that the disproportionate amount of arrests at each event and that BLM protesters often underwent excessive police force.

“If any minority group committed the same violent acts at the sacred U.S. Capitol, they would not go unpunished, would be treated as terrorists and would face far more severe consequences,” Rajendran said.