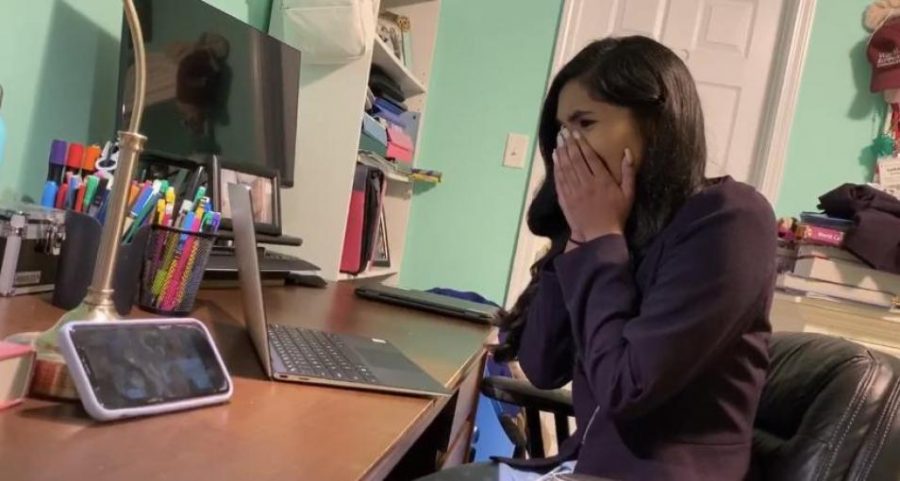 Via Zoom, senior Sarah George was announced the National Champion in the Prepared Prompt Speaking event for Speech and Debate.

Around MHS, senior Sarah George is known for her ability to talk the talk in front of others.

As a member of Speech and Debate, George has been described by coaches as expressive, confident and driven.

As a three-time national qualifier, George was no rookie when she participated in the Speech and Debate Nationals last Saturday, June 20.  But while George always shows up to her tournaments prepared to speak up, she certainly wasn’t prepared for the moment when she won the National Championship in her event.

Speech and Debate encompasses 21 different events, with more than 140,000 eligible to compete in tournaments through the National Speech and Debate Association (NSDA) nationwide. George was one of 21 students nationwide to win her event.

George is the second MHS student to ever win a Speech and Debate National Championship. The first was Ed Tulin, who won the United States Extemporaneous Speaking event in 1999.

Because of the ongoing COVID-19 pandemic, the NSDA replaced the Impromptu Speaking event, which George had originally signed up for, with a Prepared Prompt Speaking event instead.  George won this event filming herself talking in a five-minute video about a given prompt.

Given a list of prompts to choose from, George chose one by “The Office” character Michael Scott that stood out to her.

Scott talked about grief, which George said she related to because when she lost a friend to suicide, she didn’t know how to grieve, but learning to do so helped her overcome the feeling of loss.

“The prompt I chose was regarding the importance of grief as a coping mechanism to moving on in life. I dedicated it to my dear friend,” George said.

George advises other aspiring speakers and debaters not to focus on the prestige of winning, but on the impact of the words they speak.

“I might have won this award, but it was America who won a new perspective on grief,” George said. “ Once you have a bigger purpose for glory, that is when your true potential will blossom.”

“She is competitive, but her drive to succeed is more internal than external, and with that comes intense dedication to meet her goals,” Sanazaro said. “Sarah writes her own material for competition, and she’s gifted with putting together speeches that engage and move her listeners.”

Sanazaro said to be successful in Speech and Debate, one has to practice a lot, in addition to getting feedback and advice to improve.

Bijoy said Sarah’s determination and perseverance have led to her success in speaking competitively.

“Sarah is a very hard working and goal oriented person,” Bijoy said. “During her freshman year, she came back empty handed from NSDA National Competition and she told us that this would never happen again.”