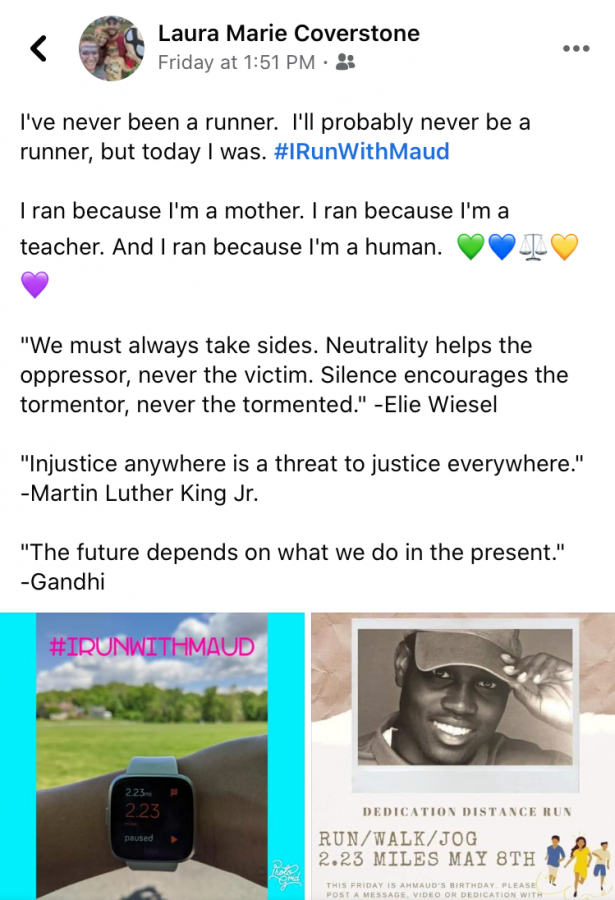 Laura Marie Coverstone, language arts teacher, said social media tributes and hashtags, such as #IRunWithMaud, can become therapeutic as they allow individuals to feel connected and to mourn during the COVID-19 pandemic’s stay-at-home orders and social distancing policies. “There are many ways to be heard without physically being present to advocate,” Coverstone said. “A lot of great conversations have been started and letters have been written that may have not been so articulately crafted, if people did not have the time to do so. For once, we have time on our side, and hopefully, we get it right this time.”

Laura Marie Coverstone, language arts teacher, felt her stomach drop and sickness wash over her after reading a news headline concerning the death of a stranger—Ahmaud Arbery.

“As a mother, my heart breaks for his mother, and all those who loved him,” Coverstone said. “As a teacher, I’m furious for my students of color and feel a responsibility to better educate myself and others on the inequities that exist. As a human, I am having so much trouble wrapping my head around another alleged, senseless act of violence.”

Her feelings of hopelessness were accompanied with determination as Coverstone, not a self-described runner, joined a global campaign Friday, May 8, using #IRunWithMaud to honor Arbery’s 26th birthday by running 2.23 miles, a tribute to the date of his death, Sunday, Feb. 23.

“While my run did not bring about an epic result, it did allow me to reflect,” Coverstone said. “It was my hope that my Facebook post would provide some comfort to my friends of color and open up a dialogue with some of my white friends who may have been reluctant to talk about race and racial inequities.”

Arbery, an unarmed black man, was shot and killed about two miles from his home in a neighborhood outside Brunswick, Ga. He was reported jogging when two armed white men exited a truck and confronted Arbery, as stated by the Georgia Bureau of Investigation (GBI).

Gregory McMichael, a former police officer, and his son Travis McMichael were arrested and charged with murder and aggravated assault Thursday, May 7, due to supporters of Arbery’s family raising concerns over delay in legal action and racial and systemic inequities in the criminal justice system.

Sophomore Principal Carl Hudson, sponsor of Marquette Academic and Cultural Club (MACC), said Arbery’s case resembles others such as the death of Travyon Martin and society needs to reflect on the incident and handling of the investigation.

“I think this is a tragic situation of another African American young man who was killed, and who didn’t need to be killed,” Hudson said. “I’m not sure what angle the father and son said as to why they did it, but it does not justify that an unarmed black man was killed because he was running down the street.”

Hudson said this case highlights increased societal distrust toward police officers and investigators, especially when involved in cases of controversial shootings of young, black men, due to a history of including false accusations or information in their reports.

“I am always concerned about police and witness statements being accurate and true,” Hudson said. “This is another case that without the video, this wouldn’t have been considered a crime. This young man’s death wouldn’t have been fully investigated and there may not have been justice for his family.”

He also said the nation must address trust issues regarding the criminal justice system as worsening societal relations has caused law enforcement to develop fears and biases based on the demographics, past experiences or descriptions of individuals and situations.

Hudson said in his career he has dealt with false accusations against him and onto students, and he strived to have, or involve someone with, an unbiased perspective.

“There have been times students were accused of things that were false, they were fabricated and they were lies,” Hudson said. “That bothers me because I’d think if this adult lied about this student, could they have possibly lied about other things the kids have done or didn’t do?”

Carlos Andrés Restrepo, Class of 2008, also ran for #IRunWithMaud, and he said although he is Colombian, the complexion of his skin may not reveal his heritage, an apparent situational advantage Arbery may have lacked concerning racial biases.

“I don’t think I’ve ever experienced that level of racism, even though I am from another country,” Restrepo said. “I cannot even imagine what it is like to live with fear as if there’s a target on your back, and it doesn’t matter what you do.”

Reflecting upon years of lynchings following the murder of Emmett Till, Restrepo said he wasn’t optiminstic about societal change from Arbery’s story, but it is still important to advocate against it.

“In America, people have a hard time admitting there’s a problem with race,” Restrepo said. “People live in their own little bubbles and little world, and even if they’re not racist or don’t think they are, they are completely blind to the struggles of many other people that cannot live freely because of the color of their skin.”

“People would look at this and say ‘would [this] have happened had it been a white person jogging or a female jogging?,” Hyde said. “This was something that was done in broad daylight. It was done against a person of color that usually slots into the age range of the demographic the media pushes for being violent criminals.”

Looking at the case as a former military police officer and public safety officer, Hyde said there were significant mistakes made by the McMichaels, and he does not condone their attempt at a citizen’s arrest, especially as they failed to call police or verify Arbery commited a crime.

He also said the delayed attention to Arbery’s case could relate to a need for motivation by the majority, or those with higher societal authority, to act concerning a minority-focused incident. The stay-at-home-order protests at the Michigan Capitol could reveal differences in societal reaction to cases with persons of color.

“Imagine some of the outrage had we switched the groups protesting at the Michigan Capitol, making them armed African American men and women instead of Caucasian,” Hyde said. “Would the news articles be the same way? Or would they say ‘a bunch of thugs stormed the capitol building’? Why is the same narrative not applied to the other side?”