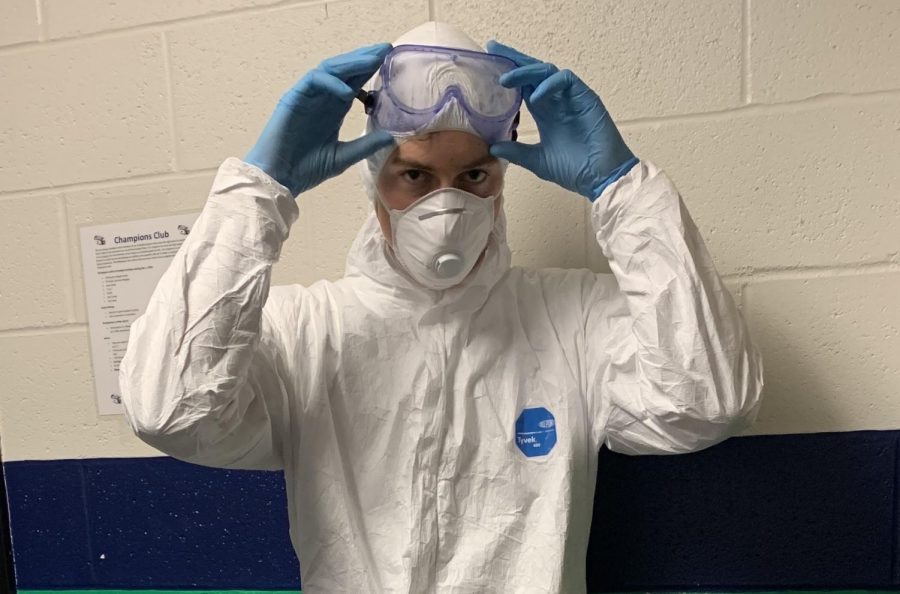 Finn Griskauskas, junior, wore a hazmat suit to school Thursday out of concern for his health because of the epidemic.

“We’re getting cases around the country. It’s crazy,” Griskauskas said. “News outlets are saying that it’s looking to get worse. Worse than it is right now. So I’m just taking necessary precautions.”

The World Health Organization recently declared COVID-19 a pandemic. In the U.S. alone, there are 1,215 cases of the illness, and 36 total deaths.

Missouri has about 1-5 cases of COVID-19, according to the CDC, however the growing rate of cases of the illness have students frightened for their health and well

Griskauskas said Principal Dr. Steve Hankins approached him about his choice to wear a hazmat suit and said that if he felt pressure from people getting sick, then maybe he should stay home from school.

“I feel like I still need to come to school to learn; I can’t be skipping school. I have the right to wear this,” Griskauskas said. “The school told me they can’t stop me, but they’d rather me not wear it.”

Griskauskas said the fact that symptoms can take a while to show, about 2-14 days according to the CDC, makes it vital that people look out for their safety.

According to the CDC, the populations at higher risk of contracting the COVID-19 illness are older adults and those with chronic illness. Nevertheless, Griskauskas still said it is important that young students remain cautious of the illness.

“We don’t know about the virus, which is the scary part. Viruses can adapt. That’s something we have to pay attention to, Griskauskas said. “Until we have a vaccine or know a little bit more, I’m going to carry on with what I’m doing.

Kyle Ross, junior, is a member of Speech and Debate. The national conference for Speech and Debate, which was supposed to be on Thursday, was canceled early Thursday morning because of the COVID-19 virus.

Before the cancellation, Ross said there were health procedures in place, like staying away from other teens when you aren’t debating and not shaking each other’s hands, already mandated at speech and debate events to prevent spread of the disease.

Timothy Bowdern, math teacher, also said people are overreacting in that many are buying mass amounts of toilet paper and hand sanitizer, but that he understands why it may concern people that young people may spread the virus to the elderly.

Bowdern predicts school will be canceled after break due to many colleges closing down to prevent spread of the virus. However, according to a message released earlier this week by Rockwood regarding the COVID-19 pandemic, as for right now the St.Louis County Department of Public Health isn’t recommending closing schools.

“Universities are canceling classes, and I think that that would help stop the spread, not being in mass quantities, will help slow the spread a bit and give people some time,” Bowdern said.

If the district should decide to cancel school, it is likely they will opt for online curricula, which is in the works right now in case it is needed. Bowdern said the consequences could impact select groups of students.

“I think that majority of MHS students will be fine in their major classes, but courses like drafting and P.E. and all those other courses, it’s kind of hard to do because it’s online,” Bowdern said. “Kids that academically struggle, they’re going to have a tough time not having an educator teaching them.”