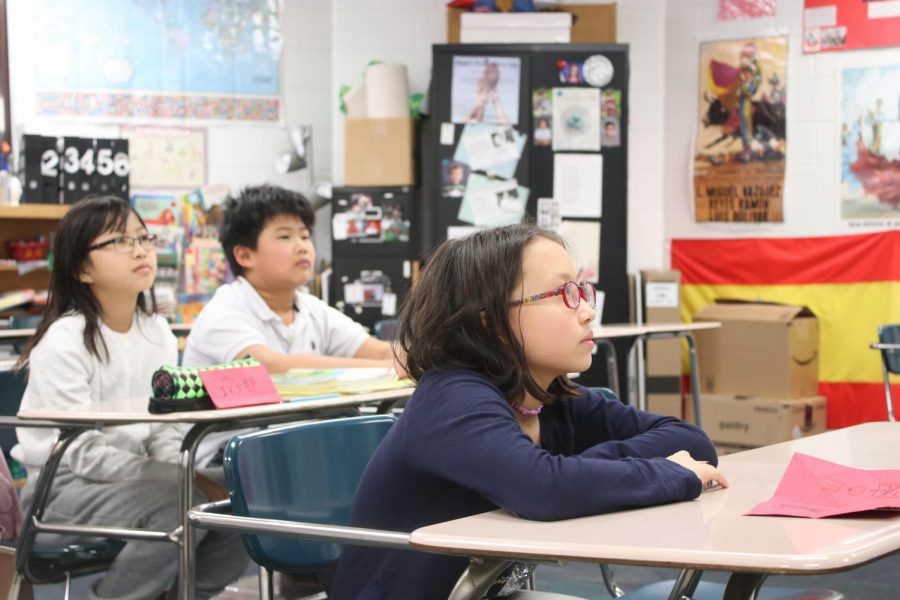 Children attend a simplified Chinese class at the St. Louis Chinese Language School at Selvidge Middle School. The teacher discussed the coronavirus, how easily it can spread and how a carrier does not have to show any symptoms to transmit it. Students raised $200 for Wuhan relief by donating spare change and their allowance.

When Jenny Chiu, sophomore, was walking through the cereal aisle of Target shopping with her family, she noticed a woman staring at her. As Chiu walked past the woman, she was surprised to see the woman point to her and remark to another shopper, ”stay away from them, you could get infected.”

With the rise of the new coronavirus, Chiu has increasingly been exposed to xenophobia and sometimes outright racism. It started off with her friends making sarcastic jokes, then progressed to strangers and people in her classes giving her dirty looks whenever the coronavirus was mentioned, and now even noticing people’s fear and discomfort when she is out in public.

The coronavirus, named COVID-19 by the World Health Organization, originated in China and is closely related to the SARS virus. Coronaviruses are mostly seen in animals and initial symptoms are typical of a common cold or the flu.

The first case on U.S. soil was confirmed Jan. 21. KMOX Radio reported two positive cases in Chicago, Ill. and about 20 people in the St. Louis area are being monitored for exposure to the virus.

Chiu attends St. Louis Modern Chinese School on Sundays. However, she said the paranoia surrounding the coronavirus has led to the cancellation of Chinese School for three consecutive weeks. When classes resumed Feb. 23, she said they were mostly empty with two to three students per class and only half of the teachers in attendance. Chiu said out of the students that did show up, the majority were wearing surgical masks.

In addition to canceling classes, Chiu’s Chinese school has taken other measures, including keeping windows open at all times and installing hand sanitizer dispensers in every class.

She said the main reason for the cancellation and drop in attendance is the fear and paranoia of Chinese parents. Chiu’s own mother instructed her to wear a mask to Chinese school out of fear. The coronavirus has made everyone in her family hyper aware of germs, cleanliness and sanitation.

Chiu’s friend in China has the coronavirus and her grandparents are currently living in a building where the coronavirus has already spread, which she said has added to her family’s paranoia and cautiousness.

She said the paranoia has affected her personally as well. While having the common cold, Chiu said she couldn’t help but fear the worst.

“I knew it wasn’t possible, but in the back of my head I was like, ‘what if I have it?’ I was so paranoid,” Chiu said.

Chiu said that, even more than the paranoia and fear, racism has been affecting the Chinese community the most.

When it comes to joking about the coronavirus and treating it as a meme, Chiu said it is mostly okay with her to joke about it. She said it is funny rather than offensive, and she enjoys being able to relate to other Asians through jokes. However, Chiu acknowledges that it truly matters who is joking and the tone and intentions behind it.

Sarena Yeung, senior, said, while she isn’t particularly offended with jokes about the coronavirus, she is annoyed when people joke about it while misinformed. She’d like people to know the coronavirus is not as fatal as it is made out to be and that the deaths that have occurred have only happened to the elderly or people who have pre-existing conditions.

“People are just derogatory and degrade other people without knowing their culture and their story,” Yeung said.

She said the first time she learned about the coronavirus was not through a reputable news publication, but through the internet. Yeung researched the virus, but she understands most people have no further knowledge about the coronavirus outside of it being a meme. Though she has not seen racism personally, she said she has seen it on the internet and through media, where people use the screen as protection to say whatever they want.

“This is definitely an easier way to slip in some of the comments you cannot normally say outwardly because you would offend someone who would probably call you out on it,” Yeung said. “Since this is such a mainstream topic at the moment, you can get away with it because people have become more desensitized to it.”

Yeung attends dance classes at the St. Louis Chinese Language School. She said she has not gone for a couple of weeks and that her mother has put her on “house arrest” from there.

She said the main reason Chinese parents aren’t sending their kids to Chinese school is misinformation  blowing the virus out of proportion.

Yeung said she wishes people do their research before talking about it to avoid misinformation and its harmful effects, such as unintended racism.

“Hopefully, when this blows over, people will learn that it’s not cool to be racist ever,” Yeung said.

Ethan Lin is the general manager of Pan-Asia on Manchester Road, the largest Asian supermarket in the state. Lin said sales have dropped by about 10 percent since the beginning of February when the coronavirus started to gain significant attention from the media.

He said 30 percent to 50 percent of his customers are East Asian and the paranoia in the East Asian community has affected business at Pan-Asia.

“I think that’s why they try to stay at home,” Lin said.

Lin said sales improved at the end of February after action taken by the government helped reduce the fear of the virus. On Feb. 26, President Donald Trump put Vice President Mike Pence in charge of the government’s response to the virus, after denying entry to foreign officials who recently traveled to China back at the end of January.

Lin said the Chinese media is partly to blame for Asian customers wanting to stay home rather than going out to shop at Asian businesses. Even though the risk for getting the virus is very low, Lin said the media makes it out to be much more than it is.

“Customers would rather be safe than take that risk,” he said.

Lin said Asian employees at Pan-Asia, especially those who have family in China, have expressed concern about the coronavirus. Lin provides the staff with surgical masks, and though they are not required to wear them, many employees choose to.

There are two other Pan-Asias in the U.S., one in Nebraska and the other in Kansas. Lin said it has affected the Manchester Pan-Asia the most because St. Louis has a higher Asian population and, consequently, more Asian customers.

“In the three years since Pan-Asia opened, this is the single most [significant] political incident that has impacted our sales,” Lin said.

Ed Bolton, chemistry teacher and sponsor of the East Asian Student Alliance, said what makes the coronavirus seem like a bigger threat than it actually is is the connectedness of the modern world.

“Viruses like that can be scary because of the freedom of movement we have,” Bolton said. “It’s hard to isolate them and to treat them because of that.”

Bolton said he knows if his Chinese students have family over in China it can be difficult for them to cope. He also said, even though there is a lot to process about the coronavirus, students are already so busy with their lives that the coronavirus doesn’t affect a large part of their day-to-day life.

“It’s scarier for students who have friends and family [in China] because it’s very real,” he said. “A lot of people don’t think about that when they say something.”

An email was sent out to parents and staff by Superintendent Dr. Mark Miles Thursday, Feb. 27 addressing the coronavirus as a potential threat to the district.

Principal Dr. Steve Hankins said, even though the risk is very low in Missouri, RSD is taking measures to sanitize and clean schools as much as possible. These measures include wiping down tables, spraying walls with disinfectant and treating the coronavirus like a flu outbreak.

“As long as there is communication between the media, government and the district, that helps with dealing with the stress of the coronavirus,” Dr. Hankins said.