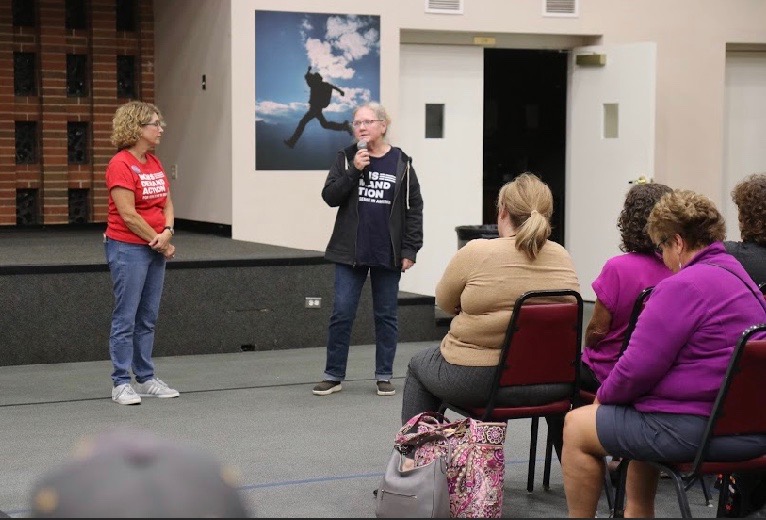 Sally Boyd shares her son’s story with the MDA group on Oct. 7 at the Manchester United Methodist Church.

In light of a recent commercial sponsored by the Sandy Hook Promise Organization, many moms in the West County Area have started to join Moms Demand Action (MDA), a group that seeks to get more regulation with gun control in the U.S. in order to prevent gun violence.

The Sandy Hook commercial, which satirically showed young students using new back-to-school supplies to survive a school shooting, motivated moms like Laura Burkhardt, a member of the West County MDA chapter, to become more active in ensuring the safety of their children.

“I cried every time that I watched it, but I think that it needs to be seen,” Burkhardt said. “My youngest son is 8. He lives that.”

The commercial sparked a debate within the West County Mom Connection group, a Facebook forum on which moms in West County can seek help from one another. Burkhardt and other West County moms joined the local MDA chapter because they think it is a great way for a message about gun control to be heard.

“It’s a bipartisan group. It’s not just Democrats. It’s anybody. Anybody who wants common sense gun laws,” Burkhardt said. “Nobody is taking guns away, we just want background checks and gun-sense laws.”

At an MDA meeting Oct. 7, Sally Boyd, a member of the West County MDA chapter, shared a personal story she hopes will convince many to support gun-sense legislation.

Christopher Boyd, Sally’s son, was out with friends in Chicago riding bicycles one evening when a man came up to one of his friends and tried to rob him. Christopher tried to save his friend, but the perpetrator shot him in the chest and fled the scene.

“His girlfriend at the time was in the back of the car, fearing for her life,” Boyd said. “She was able to be with him in the street, cradling his head, as he died.”

Nobody is taking guns away, we just want background checks and gun-sense laws.”

Although it is hard, Boyd goes to gun-sense meetings like the ones MDA hosts and shares her story because she hopes it’ll prevent more tragedies like the one her son endured.

Even though many moms do support gun regulation, many also still support the right to bear arms. Jennifer Elizabeth Braswell, a member of West County Mom Connection, doesn’t know if restricting guns will solve the problem of gun control because  criminals will always find access to guns.

“The problem is there is still going to be guns, but only criminals will have them, so you will have innocent law-abiding citizens unable to defend themselves,” Braswell said. “Guns are not the problem. It’s the people who get a hold of them.”

Kyle Ross, junior, is also passionate about the gun control issue. Ross said  many of the guns in the U.S. are unnecessary and endanger the wellbeing of innocent people.

“Anything above a pistol is really unnecessary,” Ross said. “For the most part, you don’t need the weapons that people have for self defense or hunting.”

Like Moms Demand Action, Ross is concerned with gun safety in schools. He said regulation is the key to preventing more tragedies.

“There’s not a way to make sure that someone won’t bring a gun into school, unless you want to search everyone’s backpack,” Ross said. “But better mental health counseling and being aware of who may or may not be a threat is important, and schools don’t do that enough.”