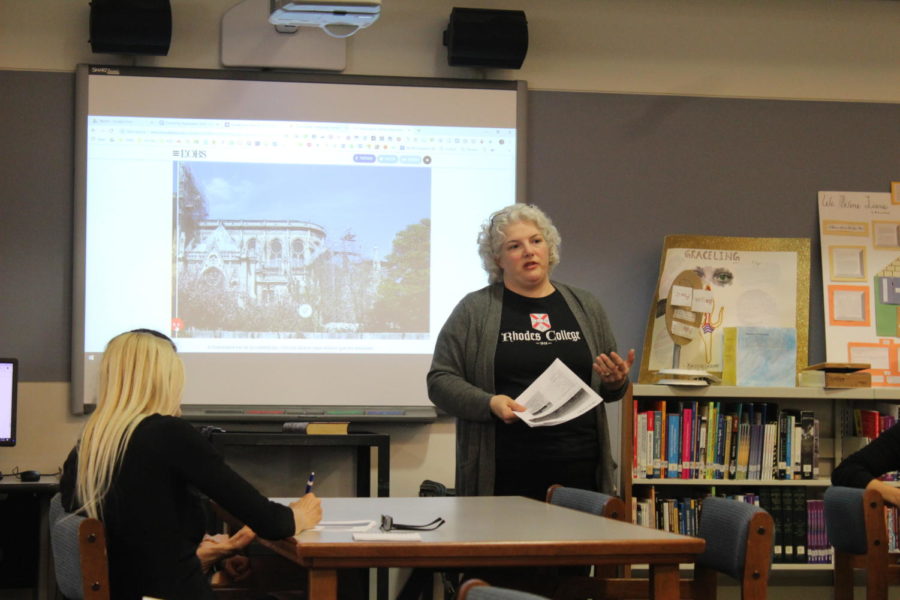 Della Thompson, french teacher, explains the future of going to Notre Dame at an informational meeting for the trip May 1. Thompson said Notre Dame has a strong connection to Paris and to France as a whole. “It’s one of those cultural landmarks that people associate with France and the city of Paris,” Thompson said. “A lot of people have heard so much about it and want to see it in person.”

Some say it was an electrical shortage. Some blame it on a cigarette butt. Either way, a fire at Notre Dame on April 15 has lead to over a billion dollars in damages and left students wondering if they’ll visit the historical landmark on next year’s French trip to Paris.

Notre Dame was built in 1163 and has been a cultural landmark for Parisiens and tourists everywhere. Due to its significance to Paris and France as a whole, students planned to visit during the French trip next Spring Break.

The trip is sponsored by explorica, a website that sets up educational tours around the world, and brings students to multiple Parisian landmarks such as the Eiffel Tower, Arc de Triomphe, and historically, Notre Dame basilica.

Shaela Hendrikse, sophomore, said she was disappointed when she heard about the fire.

“I really liked the old architecture and now we can’t get it back because it was burned,” Hendrikse said. “Since it was such a part of history and it was so old, I’m sure a lot of people are sad to see it go.”

Hendrikse said the main reason she first wanted to go on the trip was because her sister,  Chloe Hendrikse, senior, went on the trip and enjoyed it.

“Seeing Notre Dame was my sister’s favorite part of the French trip, so she was really upset about the fire,” Shaela said.

Della Thompson, French teacher, is the main chaperone and organizer for the trip and does not know if she and the students will go to see Notre Dame.

“There are other places in Paris where there are churches that are beautiful too, so we might see one of those in its place to get an idea of what the cathedral is like,” Thompson said.

Specifically, she said churches like Sacré-Cœur and Saint Germain des Prés could be replacements for Notre Dame as they have many similarities to it.

While these are possibilities, Thompson said the decision is still up in the air because she doesn’t know what the French government plans to do with the renovations; however, she hopes to know more in the next month.

Thompson said she was surprised at first by the massive response the fire had.

It’s interesting how just a building has garnered so much reaction around the world.”

“It’s interesting how just a building has garnered so much reaction around the world,” Thompson said. “I even had people come up and hug me because they felt like I’d be so sad.”

Faith Kabuba, senior, went on the trip in 2018 and said she enjoyed seeing Notre Dame.

“The first time I saw it, I was just speechless,” Kabuba said. “Seeing all of the art and the history behind it just by walking through was beautiful.”

When she first heard about the fire, Kabuba said she was shocked because she didn’t know the reason behind the fire at first.

“The French people held Notre Dame very close to their hearts,” Kabuba said. “Seeing videos where people were watching it burn and singing songs was very sad for the people of France and the culture.”

She said that while Notre Dame was a big part of the trip for her, there are still many great opportunities on the trip that will still make it worthwhile.

“While people won’t have the experience of going inside Notre Dame, they still get the chance to immerse themselves in the culture in different ways,” Kabuba said.