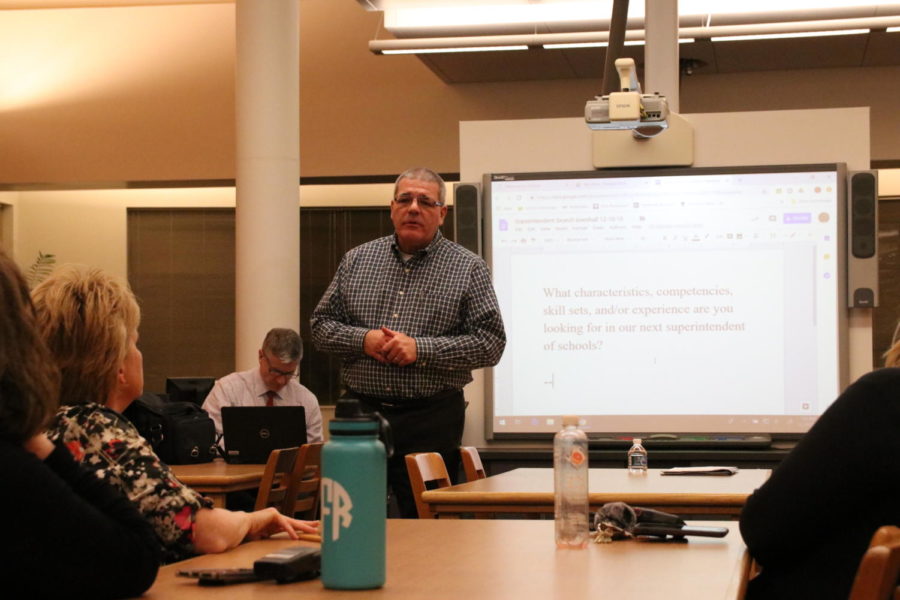 Brent Underwood, leader of search, talks about the importance of transparency in the selection process of the new superintendent on Dec. 10 at Lafayette High School.

After Superintendent Dr. Eric Knost announced retirement in October, the Rockwood Board of Education began  looking for his successor starting the 2019-20 school year.

Rockwood Board of Education president Loralee Mondl said the Board chose  a different search firm, the Missouri School Board Association (MSBA), to find the new superintendent than the one that chose Dr. Knost five years ago, called School Execs Connect.

“There were three firms that bid,” Mondl said. “One of them was the firm that chose Dr. Knost, but MSBA had the lowest dollar bid and a good reputation, so we went with them.”

In order to get feedback from schools prior to actually having candidates go through the interview process, the Board held a meeting in which administrators, including Principal Dr. Greg Mathison, were asked to name qualities they would like to see in a superintendent.

“Above all, we want to make sure everyone’s voice is heard,” Mondl said. “The head of the search team is going around and getting all the opinions he can view to make sure he gets all sides of the coin.”

Mondl said the Board really cares about what the community thinks and plans to use the data collected as a large part of their ultimate decision of who will be superintendent.

“Before Dr. Knost decided to announce retirement, he came to me and we discussed it,” Mondl said. “And when he told the entire Board in October, the search pretty much started then, so we have ample time to really get a feel for what kind of person we want, and the leader of the search can really utilize that information to get us the best candidates possible.”

The leader of the search is Brent Underwood, former superintendent for the Webster Groves School District and former colleague of Dr. Knost. He is currently employed by MSBA and will be the one interviewing potential candidates for the new superintendent.

As of right now, Underwood said the search is in the beginning profile phase, in which he gets an idea of the kind of person the school district wants before the interview process begins.

“When I start out, I meet with a lot of stakeholders and constituencies in the district, like administrative staff and student groups,” Underwood said. “Variables like the environment Rockwood is in right now, what administrative staff wants to see in their future boss, those are things that can really aid in the process.”

Using those responses, Underwood said he plans to find themes and patterns of the qualities people want and plans to use those as key points to look for when interviewing applicants.

“Once the Board and I have agreed on the main characteristics and patterns, then we actually begin the more orthodox processes,” Underwood said. “Interviewing, screening and just getting to know the people that send in applications.”

Underwood said the application was made available at the beginning of November and the deadline to turn those in is Dec. 20. After the interview process, Underwood said the Board will choose which of those candidates they want to consider.

Through winter break and the beginning of January, the Board and Underwood will meet and discuss their options, and, by mid-February, the Board hopes to have a name chosen for Dr. Knost’s official successor.

Underwood also said the Board has set a “hire date,” at which time the chosen successor will have a contract written up that will allow them to begin their job on July 1, 2019, when Dr. Knost will officially be set to retire.

In terms of what he himself would like to see in the people he interviews, Underwood said he will be largely drawing from his own experience as superintendent and a part of administrative staff, along with the state that RSD is in as of right now.

“There is no doubt that we’ll have several candidates who could do the work,” Underwood said. “And at this point in time, Rockwood is doing really well on all fronts, morale is good and the culture is strong. But what we need is someone who becomes comfortable with that, learns from that and uses it to push us forward.”

Dr. Knost said he, too, would like to see his successor continue RSD’s upwards progression, but he doesn’t really have a say in the matter.

“It’s not orthodox for one to have power over choosing one’s successor,” Dr. Knost said. “But I’m still, obviously, superintendent so I still have to talk to the Board and have meetings with them. I informally give them some advice, but the decision is ultimately up to them.”

Dr. Knost said that a lot of the process is confidential, especially since former superintendents that apply don’t necessarily want their administrative offices to be aware of their potential retirement. So, none of his involvement is formal.

However, Dr. Knost said he just wants for his successor to be able to understand RSD.

“I want to see that my successor is able to look at the situation, assess it, and be able to act accordingly,” Dr. Knost said. “All that I hope for is a connected leader.”