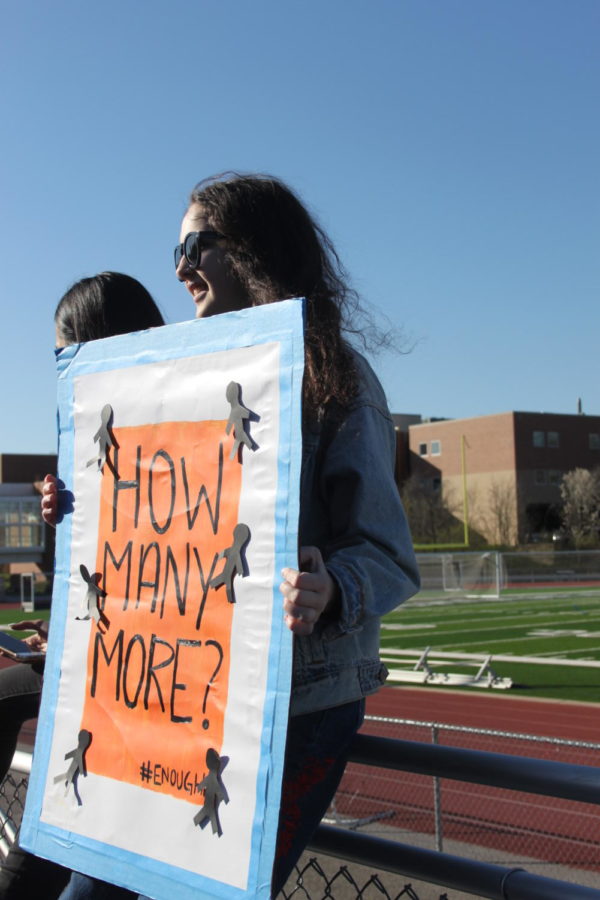 Tali Gorodetsky, junior, organized and led the Walkout. “Never in a million years would I have imagined that there would be a 100 people here,” she said. “It shows that we have students who are willing to stand up for what they believe in.”

When Tali Gorodetsky, junior and one of two organizers of the MHS Walkout, woke up on Friday morning, she was expecting fifteen students to make their way to the bleachers on first hour – if they were lucky, there would be thirty.

Instead, on a cool, crisp Friday morning, 102 students walked out of the school, sat on the bleachers and gazed up at the clear blue sky, reflecting on the change they were there to instill.

“I’m elated,” Gorodetsky said. “Never in a million years would I have imagined that there would be a 100 people here. It shows that we have students who are willing to stand up for what they believe in. There are so many thoughts running through my head and they’re all so happy.”

And then it shifted. 938 miles away, at the same time as MHS students gathered to comment and reflect, a gunman was firing at teenagers in a Florida high school – this time, at Forest High School. One student injured, no deaths yet reported.

A poignant reminder of why she was there, leading the speeches, reading the names of students who’d previously lost their lives at school. Gorodetsky was influenced to join in the movement after an experience with her friend at a Jewish convention.

“I was sitting there with my friend when he got a call from his parent that his cousin, Jamie Guttenberg, was killed in the Parkland shooting,” Gorodetsky said. “I had to sit there while he found out that his cousin had died in a place that she thought she was safe. She was only fourteen, she was a freshman, she didn’t even know who the person who shot up the school was.”

Gorodetsky said the road to the Walkout was a long one; they’d spent several months going though its logistics and spreading the word.

“Mahika [Gorodetsky’s organizing partner] was the first one to talk to Mathison and tell him that this was what we’re going to do,” Gorodetsky said. “This week, we’ve made an Instagram, been posting a lot everyday, talking about everything that’s in it, the Walkout, safety, consequences, everything so that everybody knows exactly what is happening when they do it.”

The schedule allowed time for seven student speakers, as well as a nine minute moment of silence to commemorate the victims of both the Parkland and Columbine tragedies.

Natalie Heath, junior, was one of the speakers.

“Gun violence has impacted my family and my friends pretty directly,” Heath said. “And it means a lot to me that so many people have decided that this is a legitimate issue that needs to be addressed.”

Heath said she was surprised by the crowd size at the event and was excited by their passion.

“It’s so empowering,” Heath said. “I appreciate every single person that came out here today, Because every voice and everybody makes us stronger. And we are not backing away, we are demanding action.”

Kyle Tournillon, junior, skipped AP Physics to go to the protest, a sacrifice he said he was more than prepared to make.

“I definitely feel that it’s more important for me to be active in keeping myself and everyone that I know safe, and the one hour that I’m going to miss from a science class that I can make up any time in my own time,” Tournillon said.

Tournillon is proud of the conversation he and his fellow students are pushing forward. He said talking and engaging with others is the only meaningful way to make change.

“The first step in solving an issue is always to discuss exactly the details of the situation and figure out what everyone thinks should be done before anything can really be done,” Tournillon said.

Areeb Shah, senior, said the Walkout this morning was his first ever protest. Shah said his experience will push him towards more civic engagement in the future.

“I’ve always been too lazy to come over, even to the ones that have impacted me,” Shah said. “But this is important. I feel unsafe to come to school sometimes. It’s important that we can push and mobilize these students to advocate for something. It feels pretty good to be a part of something.”

Shah said he felt comfortable in the protest due to the administration’s neutral and supportive response to the leaders.

“The faculty is also involved in allowing something like this to happen,” Shah said. “I think it shows how progressive we are getting.”