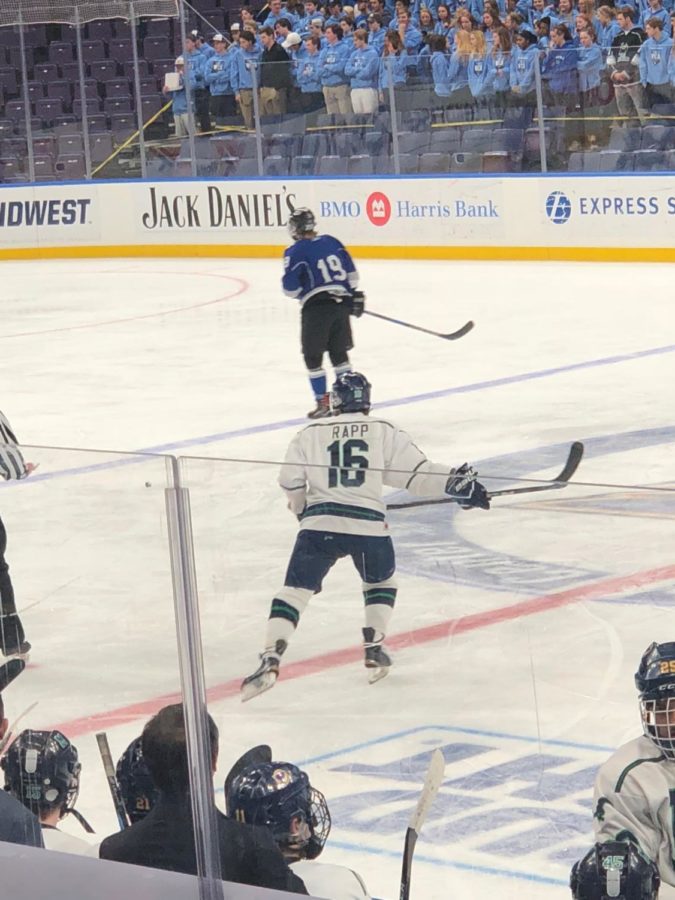 Marquette battled Westminster for the Wickenheiser Cup on Tuesday, March 13, at the Scottrade Center and lost 2-4.

Although Marquette scored the first goal with just a few minutes into the game, Westminster soon caught up and leveled out at the end of the second period, 2-2. In the last minute of the third period, Westminster scored their fourth point in an empty goal. Westminster took the title for a second year in a row, while Marquette won the title two years ago.

Devin Tockman, sophomore, has played hockey for 10 years and has been on three teams this year. He plays right wing and said the game, although a loss, was a great experience to be able to play on Scottrade ice.

“We were playing good,” Tockman said. “Every line stepped up and tried to play their best.”

Tockman said he expected the game to be good but hard because it was rivalry game.

Looking into next year, Tockman said, he hopes to see the team make it back to Scottrade for a Championship win. He said that although the seniors are leaving, hopefully the incoming freshmen will build the team.

“We have two good goalies on varsity roster and good offense and defense,” Tockman said. “I think we can be a good team.”

Gary Tockman, head coach and Devin’s father, said although he was a little disappointed going home without the cup, next year the team plans to win the division and fight in either the Wickenheiser game or the Championship.

“Things were just not going our way,” Gary said. “We worked really hard but just didn’t get the bounces that we needed.”

After the second period, Gary told the team the tie was just down to whoever worked harder. Throughout the third period, the players took a lot of shots but mostly hit the post, not scoring.

“We competed really well,” Gary said. “It turned out that they won but I thought we worked just as hard as they did in the third period.”

Sophomore Principal Richard Regina attended Tuesday’s game and said the game was great to watch due the great saves by goalies, scoring and solid hits.

Although Marquette didn’t win, Regina said it was a great experience for the younger players on the team and with more minutes on ice, the team will be able to achieve more in the years to come.

“Sometime sports are not fair, and Marquette played well enough to win, but it just did not happen,” Regina said.