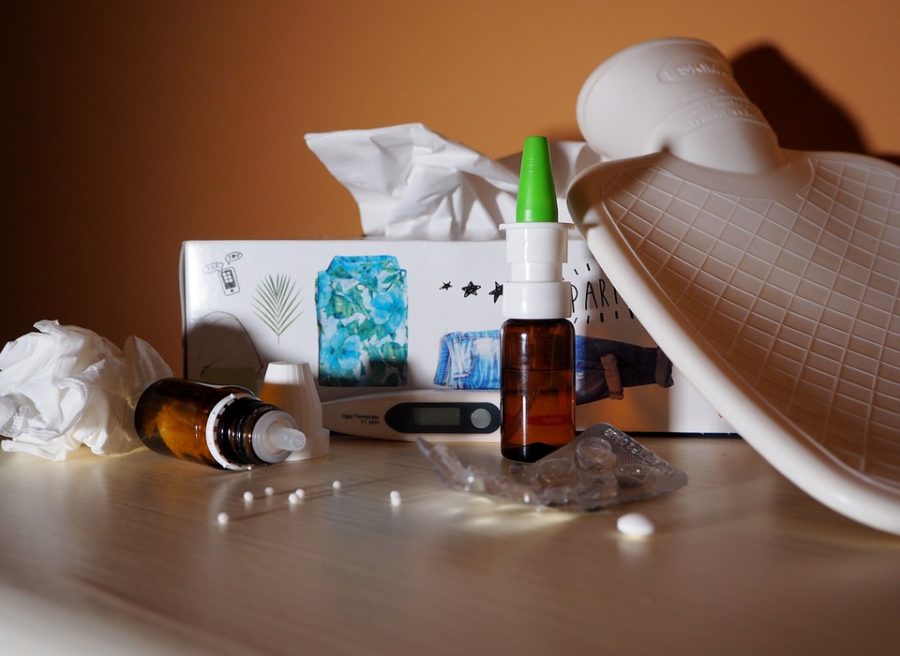 Labeled for noncommercial reuse by Pixabay.

This has been the beginning of the day for many students with the flu including Tanner Rojewski, sophomore, who had the flu for four days but only missed two school days.

“I couldn’t stop coughing and I took a lot of medicine,” Rojewski said.

He still hasn’t caught up to school but said he isn’t too worried about it because he is not the only student missing class.

Rojewski said the last time he had the flu was when he was a little kid.

To sanitize their house, Rojewski said his family has been using hand sanitizer, wiping everything down with Clorox wipes and taking medicine to prevent any potential symptoms.

“I wouldn’t wish that upon anybody,” Rojewski said. “I didn’t eat anything for four days.”

“Of course, this is only representative of diagnosed cases, so people who sought medical care,” Wehr said. “Those who are able to tough it out at home with only over the counter medicines and remedies would not be included.”

Wehr said the number one thing individuals can do to prevent the flu is to get annual vaccinations. Beyond that, Wehr recommends frequent and thorough hand washing, coughing and sneezing into the elbow, avoiding touching the T-zone, and staying away from those who are ill.

“It’s always challenging to know for sure if one is just feeling a little under the weather, or if one is truly ill,” Wehr said. “Influenza usually comes on very suddenly and includes a fever and cough. If you have these symptoms, call your healthcare provider.”

Wehr said the school district does not have a separate attendance policy for the flu, but when students have an elevated temperature of more than 100 degrees, they need to be at home to rest, drink fluids and seek medical treatment. Students should be GI stable before returning, meaning the are eating and free of vomiting or diarrhea for 24 hours.

Wehr also requests to be notified when 10 percent of students in a given building are absent with influenza or any communicable illness.

“At that point, it would be a discussion among our administration and we’d likely consult  with the St. Louis County Department of Health,” Wehr said. “In my experience, we’ve fortunately not had that happen.”

Principal Carl Hudson said that in order to help prevent the flu from spreading, the custodial staff wiped down all tables and chairs and provided disinfectant wipes for all classrooms and offices.

Hudson said that the flu can spread easily through MHS because there are more than 2,500 students and staff and exposure to so many people presents all types of germs and bacteria.

“We are a very friendly school,” Hudson said. “We shake hands, we hug… it’s easy for that to spread here.”

Teri Gibbs-Kramper, SSM Health nurse practitioner, said everyone is at risk of getting the flu; however, people with underlying medical conditions are more likely to develop further complications and die from it.

Gibbs-Kramper said that this year the flu has been so widespread because of the ineffective flu vaccine, which was developed based on Australia’s flu activity.

“It’s only 10 percent effective this year,” Gibbs-Kramper said. “10 to 30 percent depending on who you ask.”

She said that some of the main reasons that people don’t get diagnosed are that people either don’t believe in medicine, choose to remedy themselves or are uninsured.

When it comes to the flu, a lot of people blame the vaccine when they get sick, Gibbs-Kramper said. However this is not true.

“The virus that we give [in the vaccine] is a dead virus so you can’t get sick from it,” Gibbs-Kramper said.

Gibbs-Kramper said Tamiflu is the first medicine used to treat the flu. A lot of people choose not to take it because it comes with side effects, such as nausea, vomiting, headache, bronchitis, insomnia, and vertigo, and only mildly lessens the intensity and duration of the flu.

“A lot of people think that the side effects are worse than the actual flu itself,” Gibbs-Kramper said.

To avoid spreading the flu, many believe it is safe to go back to school after 24 hours of being fever free without any medicine, but Gibbs-Kramper said this is not accurate.

“The more studies have been done, the more they are realising that people are still passing the flu even after that window of 24 hours,” Gibbs-Kramper said. “It’s beginning to show that you can spread the virus before you even come down with symptoms and after you get better.”