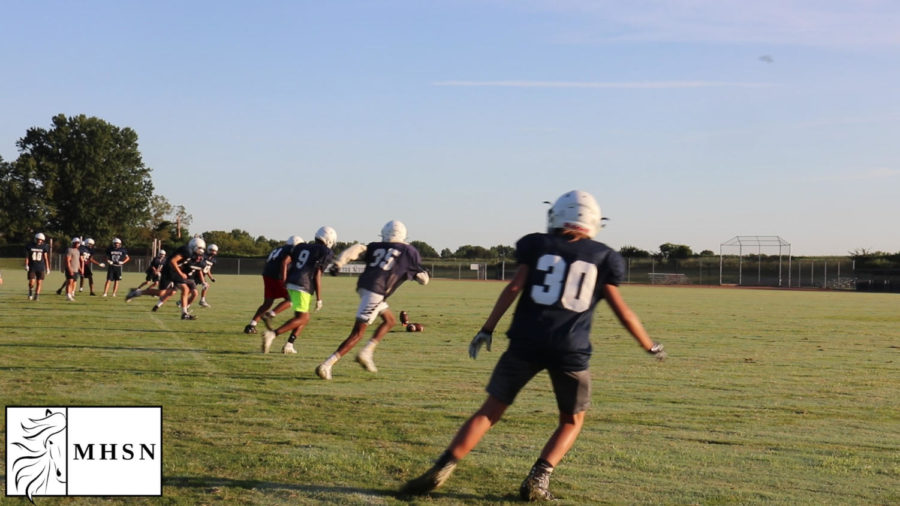 When Grier Brandt, freshman, walked into the first day of official team practice, she knew she would face challenges most freshmen athletes also encountered. However, she faced one challenge that was particularly unique to her: she is a girl on an all-boys football team. “At first everyone was kind of scared to talk to me because the situation was kind of weird, but now more people have opened up,” Brandt said.

“When I first started, they were a little nervous because of the concept of a girl playing on an all-boys team,” Brandt said.

Brandt said it would be interesting if other girls joined the team, but she said it’s more important they truly enjoy the sport rather than just joining to be unique.

“It doesn’t matter to me if more girls join,” Brandt said. “People should just do what they want if they think it’s fun.”

Jack Krebs, freshman, said some of the freshmen football players were surprised to see a girl on the first day of practice.

“It was obviously different compared to past freshman teams,” Krebs said.

Krebs said many players started to accept the change when they saw how Brandt positively impacted the team.

“When everyone saw how hard she worked to prove herself, we all stepped up our effort,” Krebs said.

Krebs said because Brandt was new to football her eighth grade year, her skills were still raw compared to her teammates. However, he said Brandt’s effort accelerated the development of her abilities since eighth grade.

“Last year was her first year playing, so her skill set wasn’t quite as developed,” Krebs said. “But she has improved a lot and has proven that she can make an impact.”

Jake Dieffenbach, assistant freshman football coach, said it was a completely new experience to have a girl on the team, but was excited to see how the situation would unfold.

“I was all for her because she had gone to M-Factor and had been working just as hard as other boys on the team,” Dieffenbach said.

Going into the season, Dieffenbach said Brandt wasn’t sure which position she would play. Because of this, she decided to work harder to eventually earn a spot as a wide receiver.
Dieffenbach also said Brandt’s attention to detail has been a positive influence on the rest of the team.

“The other day, she had a really clean block that I used as an example when talking to the team about proper blocking,” Dieffenbach said. “No one anymore thinks twice about her being a girl because she has proven her ability and work ethic can help the team in so many ways.”