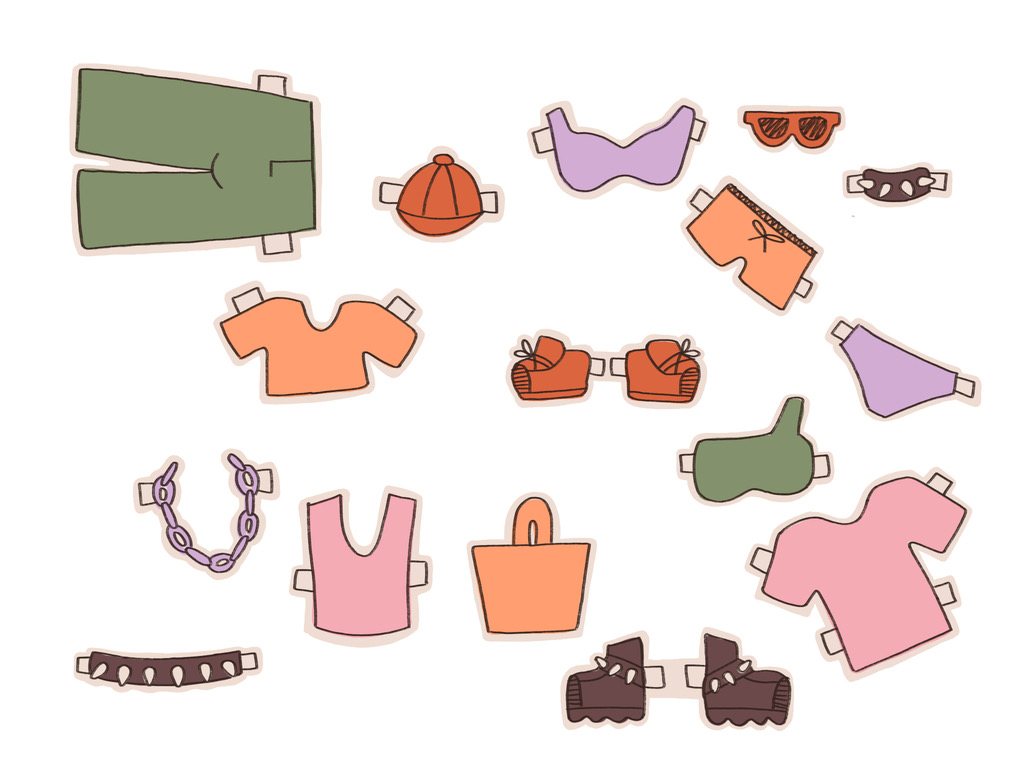 A greater emphasis on the MHS dress code this year has sparked many debates over the social, ethical and legal legitimacy of the code. (Media by Mason Kellerman (he/him))

A greater emphasis on the MHS dress code this year has sparked many debates over the social, ethical and legal legitimacy of the code.

During the first Academic Lab, Dr. Tracey Waeckerle presented the dress code via Zoom. Since then, increasing numbers of students have voiced their discontent with the policy.

Among these students is Audrey Bast, junior, who was given a warning to abide by the dress code policy or “get dress-coded,” which she was approximately 20 times last year, and continues to be.

On her way to an administrator’s office to express her grievances, Bast, in her crop top, zip-up hoodie and leggings, was advised to zip up her jacket.

“I was confused because it was only like an inch of my stomach; it’s not that big of a deal.”

Since then, Bast said she has been dress coded, or found in violation of dress code, at least twice a week.

“Everytime I get dress coded, I get so mad and that’s all I can think about for the rest of the day,” Bast said.

The district dress code, approved by the Board of Education (BOE), states that clothing that promotes disruptive behavior or displays images pertaining to drugs, alcohol, tobacco, violence, sex or hate groups is prohibited. Pants must be worn at an appropriate waistline and undergarments should not be visible. Additionally, shorts and skirts should cover a student’s entire bottom, which means they should reach the bottom of fingertips. In terms of tops: strapless tops, strapless dresses, halter tops, spaghetti-strap tops, mesh shirts or shirts that show a bare midriff are not allowed to be worn without a jacket. Hats are allowed. Chains and spiked accessories are not.

The board gets to decide what is and what is not a distraction, but they have to back it up with facts, and generally speaking, they’re going to rely on the administration and teachers to provide them with the facts. ”

Jim Thomeczek, a school law expert who represents districts across Missouri, said the district cannot put a dress code policy in place without having a reason to do so.

“That reason has to be pedagogical or it has to be intended to promote a better learning atmosphere, and any board that can’t show that can’t impose a dress code,” Thomeczek said. ”As long as you have reasons that are related to the educational experience at the school, for the most part, courts are going to allow it.”

In regards to what is specifically outlined in the code, Thomeczek said that lies entirely with the administration and BOE.

“The board gets to decide what is and what is not a distraction, but they have to back it up with facts, and generally speaking, they’re going to rely on the administration and teachers to provide them with the facts,” Thomeczek said. “A distraction for you may not be a distraction for me.”

From a legal standpoint, Thomeczek said students’ response to the dress code, whether it be a protest or a verbal denunciation, is protected by their First Amendment right, as courts have debated.

Although no new changes were made to the dress code, Senior Principal Carl Hudson said administrators have chosen to focus more on the dress code this year following the actions of other RSD schools and surrounding districts.

“For most of their jobs, if a student wanted to have their middle section out, they can’t do that because there’s a policy put in place, and that’s the way it works here,” Hudson said.

For dress code violations, Hudson offers students to either change the clothing item or cover up with another clothing item. If a student is brought to the office, the violation could be documented in their disciplinary file, parents could be contacted or the student could face detention or in-school suspension (ISS).

As people walk into the building, there’s an expectation of this just being a school. ”

“We have rules regarding cell phone usage and maintaining polite and respectful conversation in the hallways, which play a part in undistracted learning,” Dr. Waeckerle said. “All of our policies serve a purpose, and I think they’re all equally important.”

Dr. Waeckerle said there are certain things students have to do in school that are different from what they have to do out in the community, with their friends or on the weekends – dress code being one of them.

“One thing that I like to keep in mind is that as a staff we have dress code policies too,” Dr. Waeckerle said. “As people walk into the building, there’s an expectation of this just being a school.”

As a teacher and a parent of a 16-year-old daughter, Jennifer Chapman plays the same role when telling her children and students that certain outfits are inappropriate for situations like school.

“There are times when we are shopping and I’ll say, ‘That is really cute, but you won’t be able to wear it to school’,” Chapman said.

Chapman said the distinction between where to wear certain clothing has evolved, meaning people today wear the same thing to work out, go to work or go to church rather than separate wardrobes.

Chapman asks students to think of dress code as no different than a business policy.

“Would students dress the way they do [at school] for a job? If the answer is no, why is school taken less seriously? Is it really the dress code that has changed or the idea of what a school is?” Chapman said.

I think instead of teaching people to dress against their preferred style, the district needs to teach people to not think of students as objects versus people. ”

“I think instead of teaching people to dress against their preferred style, the district needs to teach people to not think of students as objects versus people,” Fritz said. “I personally don’t think a quarter inch or midriff is hurting anyone.”

Fritz said she looks forward to the day when students can keep up with the trends and not be punished for it on school grounds.

“Dressing the way you want lets people be more confident in themselves and appearance, and if you feel more confident, you’re in a better and happier mood all day,” Fritz said. “So I really do think that letting students express their style would help their work ethic.”

Kennedy Payne, sophomore, said the dress code is outdated as it is difficult for her to shop for items to fit the policy.

“I think people who are writing dress codes haven’t shopped for a girl in a long time,” Payne said. “You walk into any store and it’s so hard to find normal fitting clothes that aren’t to your knees or to the bra.”

Payne, after being dress coded twice this school year, has started to dress in defiance of the dress code policy.

“I think it’s funny how everytime I get dress-coded, administrators say it’s because it’s ‘districtating’,” Payne said. “What? My shoulder? Everybody has a shoulder, and you kind of need your arms, so that whole excuse is stupid to me.”

Payne said she is fed up with administrators who are cracking down hard on the code, and even actively avoids them on her typical routes around school.

I think people who are writing dress codes haven’t shopped for a girl in a long time. ”

After an uproar of scrutiny of the dress code from the student body at Lafayette, a handful of students from LHS violated the dress code purposefully as a way to protest from Sept. 1 through 8.

Taryn Muntean, LHS junior, broke the dress code consistently for a week for the movement.

“I figured that I’m getting dress coded everyday anyways, might as well make it mean something,” Muntean said.
Though Muntean and her friends’ efforts to make a statement didn’t make a massive impact, she said that if enough people speak up, change is inevitable.

“Truth be told, students from all the high schools are tired of it, and it needs serious change,” Muntean said.

Jack Cason, sophomore, said the dress code targets women as their clothes tend to be of a tighter fit, of shorter length and with thinner straps.

He said specific clothing items in the dress code shouldn’t be changed, but rather the entirety of the rules need to be re-evaluated.

“I feel like there’s a need for part of the dress code as in wearing things that may be inappropriate such as drugs and alcohol on t-shirts,” Cason said. “But I feel like [administrators] shouldn’t be able to tell someone to cover up their body.”

Though Cason has not been dress coded, he has noticed more girls and women being dress coded in comparison to boys and men.

This is school, and it’s a learning environment, not a fashion show.”


On other hand, Apurva Ganti, freshman, said the dress code holds all students to the same standard, regardless of gender.

“It enforces some pretty good ideals because students shouldn’t be showing everything,” Ganti said. “This is school, and it’s a learning environment, not a fashion show.”

Though Ganti said certain factions of the policy need altering, such as allowing tops that show shoulders, are strapless or have thinner straps, she said the remainder of the policy promotes professionalism.

“Your style should be able to work in a variety of environments,” Ganti said. “Of course you have the freedom of expression, that’s a civil liberty, but there are some places where showing everything is not appropriate, such as school.”