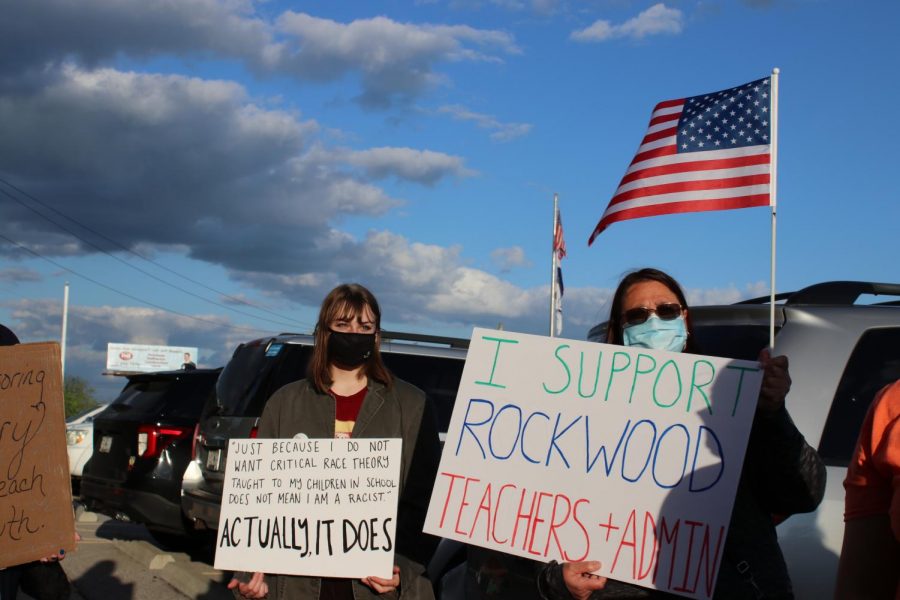 Following conflict, RSD community looks to the future for a path to recovery.

For Armon McWell, Class of 1996, his most prominent memories of MHS are of separation and isolation.

As a Black man transfering from a magnet school that celebrated different cultures, moving to RSD was a shock. To him, MHS did minimal activities for Black History Month. Not only that, but McWell said Black students loitered in one hallway and administrators were always there.

“It was kind of eye opening,” McWell said. “It is one of the few things I really remember that sticks out to me.”

Now, a quarter century later, issues of inclusion and diversity have resurfaced in the district.

The main concern with curriculum is the belief that the district is teaching critical race theory (CRT) to students through anti-police, anti-white sentiment. CRT is a form of thought that emphasizes the social construction of race and the racial caste system that classifies people of color (POC) into the bottom tiers, according to the American Bar Association.

During the Thursday, May 6, Board of Education (BOE) meeting, BOE President Jaime Bayes read a statement from the BOE thanking the work of teachers, condemning harassment and racism and clarifying the district does not teach CRT.

At the state level, House Bill 1141 is currently on the floor, which would bar districts in Missouri from teaching CRT.

After the concerns of the curriculum were raised, the 6-12 Literacy Speech Coordinator sent out an email in April to teachers suggesting teachers limit the course material they post online. This event further upset community members and raised issues of transparency.

Now, members of the district are looking to resolve the issues and move forward.

As I think about my own life journey, it was those varied experiences that led me to where I am today in the exploration of a variety of different ideas, working with people who are different from me, similar to me.”

In efforts to move forward, the district will continue implementing The Way Forward.

The Way Forward was intended to build an equitable and accessible environment for all students and was propelled by Dr. Miles, Executive Director of Student Services Dr. Terry Harris and Director of Educational Equity and Diversity Brittany Hogan in 2018. The plan focuses on curriculum, professional development, human resources and access to resources.

Currently, the plan is in Phase 4 of strategic planning and implementation of equity initiatives at the various levels.

“When we developed The Way Forward, you [community] told us that you wanted students to think globally, learn to be problem-solvers, collaborate with others and engage thoughtfully and respectfully,” Bayes said in a statement from the BOE. “As adults, we should be modeling those behaviors for our students.”

When Dr. Miles joined RSD two years ago, he was drawn to the district’s work in diversity, equity and inclusion.

“As I think about my own life journey, it was those varied experiences that led me to where I am today in the exploration of a variety of different ideas, working with people who are different from me, similar to me,” Dr. Miles said.

Assistant Superintendent of Learning and Support Services Dr. Shelley Willott has been heavily involved with The Way Forward since its inception.

Dr. Willott said The Way Forward is not a curriculum, but a strategic plan that dictates how the curriculum will operate moving forward and what it will focus on.

“The place that it played out the most was in literature options with our language arts classes, because we realized that we [didn’t have] a diverse selection in literature,” Dr. Willott said. “So, our focus in the curriculum department is making sure that there is a multitude of perspectives and cultures and backgrounds shown in our literature that kids get to choose to read.”

Dr. Willott reiterate the same point the BOE made in their May meeting: CRT is not in the RSD curriculum, nor is it in the Missouri state learning standards, which is what the district uses to build their curriculum.

Moving forward, Dr. Willott said lesson plans will be worked upon this summer.

“We will be reviewing all of those lessons over the summer to ensure that there is a balance, there are multiple perspectives that don’t lean too far in one direction or another and there is a constant balance of information there,” Dr. Willott said.

Laurie Schultz, language arts department chair, interpreted the controversy as a misunderstanding of the “choice” element of books in the curriculum.

“A lot of people aren’t going a step further to actually find out that in most schools and units where that book is listed, it’s a choice,” Schultz said. “People jumped to the conclusion that [their] student is being made to read a book that is making them feel bad for something that they have no control over.”

Schultz said the department has been making a conscious effort to make literature in classrooms more reflective of the student body.

“We are trying to make our literature more of a mirror, so that certain kids can choose to read content that’s going to open up a window to a new experience and a new perspective,” Schultz said.

Schultz said while some parents in the district have raised concerns, she hasn’t heard any MHS students echoing those beliefs.

“People think we’re having these in-depth, detailed conversations, trying to force a belief on them. It just doesn’t happen with 15 year olds,” Schultz said.

It is extremely important to show diversity in the curriculum, but when it is not including both sides of the argument then it presents a problem.”

Andrew Scognamiglio, freshman, said the root of the problem is the incorporation of political views into the curriculum.

“It is good to look at both sides of any conversation to encourage independent thinking about a topic, but when political viewpoints, leanings or rhetoric is introduced, it muddies the waters,” Scognamiglio said.

Scognamiglio said he has not noticed a lack of diversity within the curriculum and the material used has been an adequate representation of the student body.

“It is extremely important to show diversity in the curriculum, but when it is not including both sides of the argument then it presents a problem,” Scognamiglio said. “We are one student body and we are one human race. By pitting one side of any group against another, it accomplishes nothing.”

Scognamiglio said a route to recovery is possible for RSD if they practice transparency.

“That transparency comes with sharing with all members of the community what is exactly being taught in the classroom, not just what the district thinks is acceptable for certain people to know,” Scognamiglio said.

Chloe Kang, sophomore, has been voicing her support for the curriculum on social media.

“I’m concerned and frustrated about this situation,” Kang said. “Diverse perspectives from many different groups should be guaranteed in any welcoming school community, and it should never be a debate.”

Kang said she was upset at some parents’ reactions to the curriculum.

“They are keeping their children unaware of global societal issues, encouraging racism towards underrepresented minority groups and depriving their kids from different world views,” Kang said.

Though Kang hasn’t experienced a lack of diversity during her time at MHS, she has heard of others being underrepresented. So, she wants RSD to continue to implement diversity within the curriculum.

Junior Principal Carl Hudson echoes Kang’s belief in an inclusive curriculum in education, and he adds an element of diversity among the RSD schools as the only Black staff member at MHS.

Hudson said it’s critical to have more POC, especially Black people, among teachers. He compares being the lone Black staff member to some women being the sole woman in the room — it is uncomfortable, he said.

Hudson said it will be a greater challenge for RSD to recruit minorities and Black teachers after the events of the past year.

“Why would they come to Rockwood when there is so much turmoil?” Hudson said. “Why would I come to a place where it’s in the news and people are yelling at each other?”

The road to recovery, Hudson said, will be difficult. He said communication with parents and rebuilding trust is key.

“Bridges fall down when we don’t communicate,” Hudson said. “We’ve got to start talking, not yelling, and having civil discourse.”