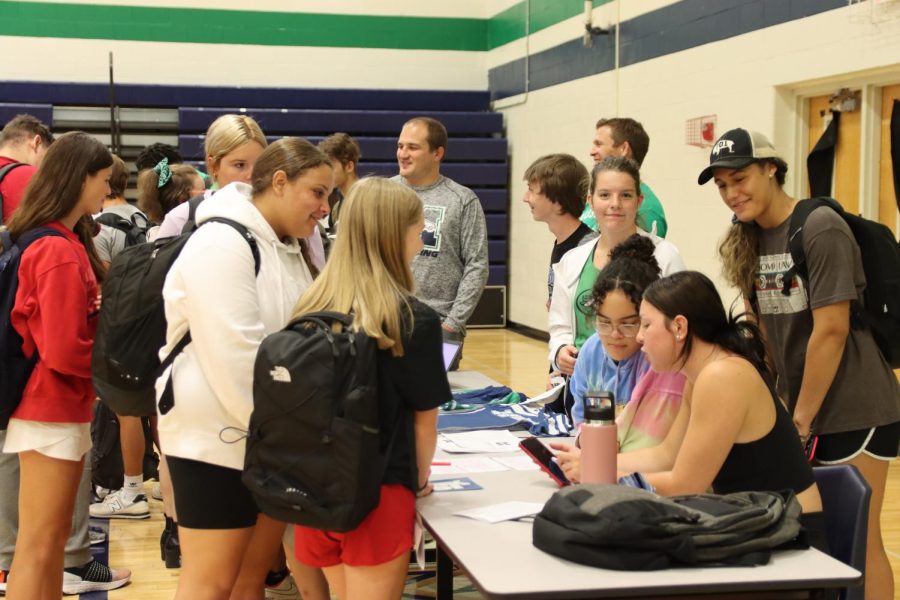 Freshmen Lexi Morgan and Ellie Pagan learn about the wrestling team in the gym during the Activities Fair Aug. 31. There were a total of 85 booths spread throughout the hallways, the Commons and the gym. Most of them were set up and run by the students in the clubs.

“There are just so many opportunities at Marquette, and it can be a little overwhelming, but it’s also really cool,” Samantha Perz, freshman, said.

The Activities Fair on Wednesday, Aug. 31 was an opportunity for students to explore the clubs and activities MHS offers. During Ac Lab, leaders of clubs and sports ran booths throughout the school and invited new members to join their activity.

Perz said she visited many of the tables in the commons and on second floor, but her favorite booths offered candy or snacks along with encouragement to get involved.

Sophomore Daksha Daggumati, president of the MHS branch of National Alliance on Mental Illness (NAMI), ran a booth at the activities fair. NAMI gained several new members, which Daggumati said is extremely helpful at the beginning of the year and will help boost their ability help and spread awareness around the school and community.

The best part about the activities fair, Daggumati said, is how easy it is for students to interact with and learn about new clubs. Due to their success at the fair, NAMI will participate in all future activities fairs with the hope of bringing more exposure to their cause and to increase participation.

The activities fair isn’t a brand new concept for MHS. There was an activities fair five years ago, but due to COVID-19, it wasn’t safe to hold such a large gathering until now.

“A lot of our sponsors and clubs were really excited about having booths and were able to very quickly set up and organize,” Dr. Waeckerle said.

There were a total of 85 booths spread throughout the hallways, the Commons and the gym. Most of them were set up and run by the students in the clubs.

“Getting involved helps build memories and friendships that most people look back on after high school,” Dr. Waeckerle said.