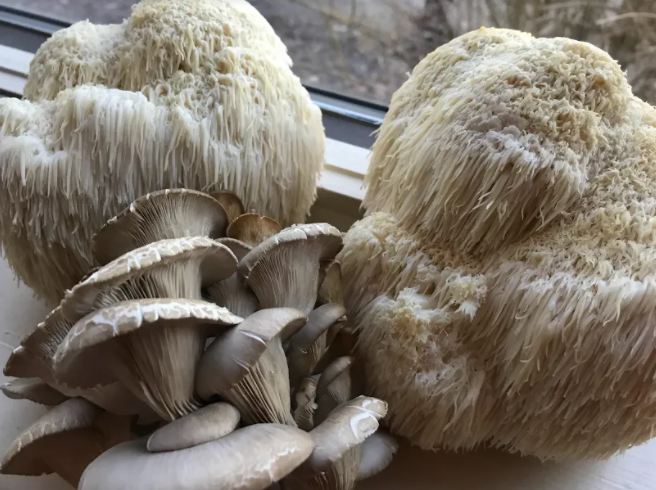 Luke Mueller, Junior, started to grow mushrooms on his free time as a hobby at the beginning of the year. The two species he grows are Blue Oyster (left) and Lionsmane (right), which he cooks in different ways that include putting them in soups or frying.

Toward the beginning of the year, Luke Mueller, junior, found a new hobby: growing his own mushrooms.

His interest in mushrooms started when he went forging with his dad while mountain biking. From then, he started researching mushrooms through mainly YouTube and decided he would grow his own.

Since then, he has put together almost 15 still-air bags of Lionsmane and Blue Oyster mushrooms.

“It’s not like a seed that you put into the ground; it’s much more controlled,” Mueller said.

The process of growing the mushrooms takes about a month, starting with inoculating the substrate in a bag with mushroom mycelium, then putting the bag in a homemade still-air box and waiting for it to colonize for two weeks. Mueller cuts holes in the bags, and with frequent checking, the mushrooms start to grow and are ready to be picked two weeks later.

With almost two pounds of Lionsmane from his recent batch, Mueller said he’s getting a little sick of the taste of mushrooms, and does plan to diversify the species he grows.

Mike Mueller, Luke’s father, experiments with different recipes from the grown mushrooms, from frying them, to putting them in soup, to sauteing them with onions and putting them on steak.

“Mushrooms are overlooked, and most people are scared of growing or picking them since there are poisonous mushrooms out there, but it doesn’t take a lot of education to find the good ones,” Mike said.

Growing up hunting and being out in the wild, Mike said he uses his previous knowledge to identify wild mushrooms that grow during different times throughout the year that he finds when out mountain biking or walking through the woods.

Maxine Stone, author of Missouri’s Wild Mushrooms, said since the pandemic started, there has been a surge in popularity in younger people being interested in cultivating, researching, cooking and forging mushrooms.

She said it is great the younger people like Mueller are becoming interested in mushrooms and hopes for more to look into it.

With recent scientific discoveries and advancements being made surrounding mushrooms, Stone said the interest will continue to grow and hopes that more people will see the importance of mushrooms.

“If we didn’t have mushrooms, the tree that fell 4000 years ago would still be there,” Stone said.