More than a statistic: students, faculty open up about their experiences with COVID-19 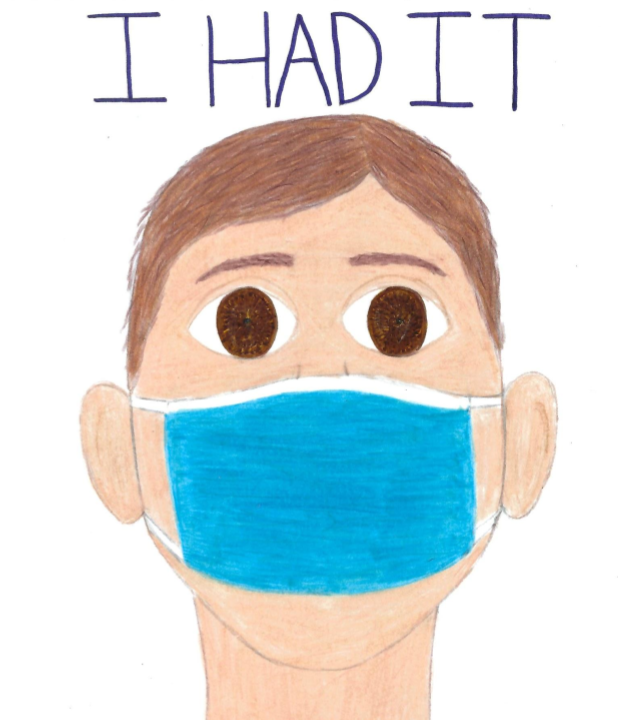 Students and faculty who have tested positive for COVID-19 have opted to speak openly about their diagnoses and experiences.

When Steven Schmitt, math teacher, found out he had tested positive for COVID-19, he wanted to be transparent about his diagnosis.

Schmitt revealed to his students that he had tested positive and said he isn’t sure whether sharing this information was a good thing or a bad thing, but that it made him feel honest at the very least.

“I think a lot of others, whether they have tested positive or negative, have questions and if my experiences can help them, then I want to offer what I am able,” Schmitt said. “I have been asked many many questions and I have had several parents also reach out.”

Schmitt said his experience with COVID-19 was not a storybook case. He initially had a low-grade fever and extreme fatigue, and he suspected he had COVID-19 when he lost his sense of smell.

“On a weird note, I could slightly smell fruit smells, but anything like evergreen I could not,” Schmitt said.

Following his battle with COVID-19, Schmitt said he struggled with his energy levels, but took everything easy and tried to slowly regain his strength.

Hannah Chun, senior and one of Schmitt’s students, was happy Schmitt was open about testing positive for COVID-19 because she said letting people know that he had COVID-19, and that he’s taking care of himself and trying to be as safe as possible, is the best way to go about it.

“Right now we’re in a pandemic, and the best thing to do is to let people know that you have or potentially have COVID to prevent more people from going out,” Chun said. “It also erases the stigma of having COVID and being ashamed to say that you have it.”

Chun said she doesn’t think that the names of those who have tested COVID-positive should be confidential. 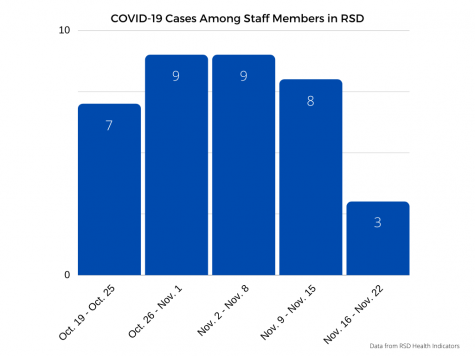 “I was in a testing room with somebody who tested positive for COVID during the SAT, and they wouldn’t even tell me their name,” Chun said. “I don’t even know if I was sitting right next to them or across the room from them.”

Blake Silverman, senior, thinks that he contracted his case of COVID-19 at a Halloween party that he attended.

At that time, RSD had seen an increase in the amount of COVID-19 cases in its schools.

As of Monday, Nov. 23, at 7:36 p.m., 15 students and fewer than 5 faculty members at MHS specifically have tested positive for COVID-19 since Halloween, according to data provided by Glenn Hancock, director of research for RSD.

Silverman said he feels comfortable openly talking about his experience with COVID-19 because the reality is there’s a good chance people his age will get it.

“It’s nothing to be ashamed of, it’s just life, and I knew I would get it at one point or another,” Silverman said. “I work 35 hours a week out of a car wash/gas station, so I get exposed everyday I’m sure.”

Silverman tested positive Wednesday, Nov. 4, after feeling minor symptoms the previous day. Initially, Silverman had experienced a scratchy throat and mild headache, but later his symptoms intensified and he also started to get severe chills. 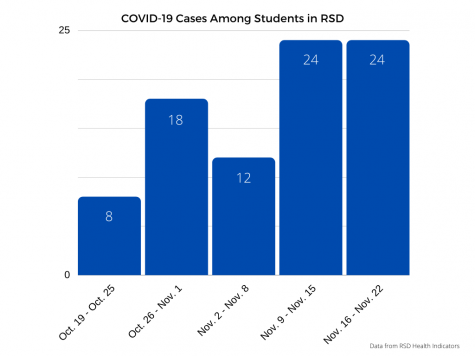 “The best way I can describe this feeling is when you go underwater in a pool and you somehow get water in your nose. And you know how your nose is like burning?” Silverman said. “I would say that’s the best way I could describe that. And it just lingered around. I probably had that feeling for a good 10 days or so.”

However, Silverman had to make other changes in his daily household life in order to mitigate the spread of COVID-19. Silverman stayed in his room to isolate himself from his family, and when he would need to exit the room for things, he would text his parents to give them a warning so they could prepare and put on a mask.

Silverman is not anti-mask wearing but said it should not be something that is forced upon people.

“I don’t believe that’s free,” Silverman said. “I think it should be highly suggested versus you have to do that.”

Silverman said the current environment with St. Louis County Executive Sam Page shutting down in-person dining is not ideal for the economy.

“I think it’s really difficult on some of these waiters and waitresses to obviously pay bills, and, you know, whatever expenses they might have,” Silverman said. “Life has got to move on.”

Silverman acknowledged that being an 18 year old, his case wasn’t as bad as others and he is thankful for that. Still, he said that it’s not as bad as what some people say and he doesn’t think everything should be shut down because of COVID-19.

“This country will be able to handle it,” Silverman said. “We’re just going to work towards getting this vaccine. And, you know, hopefully, there are less and less people who ended up testing positive like me, as we all hope.”

More than a statistic: students, faculty open up about their experiences with COVID-19