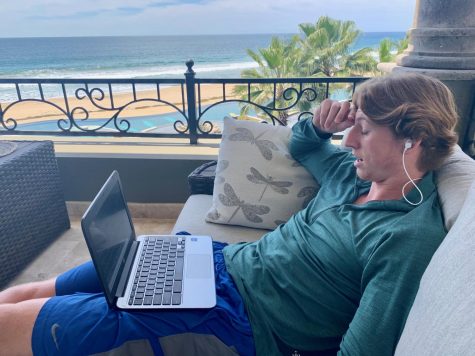 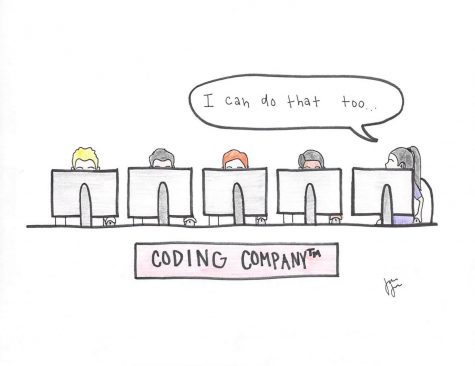 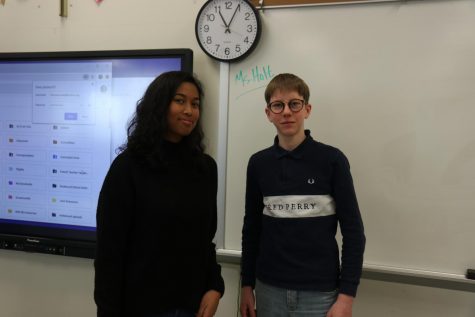 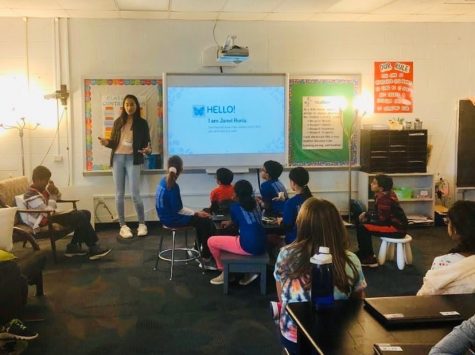 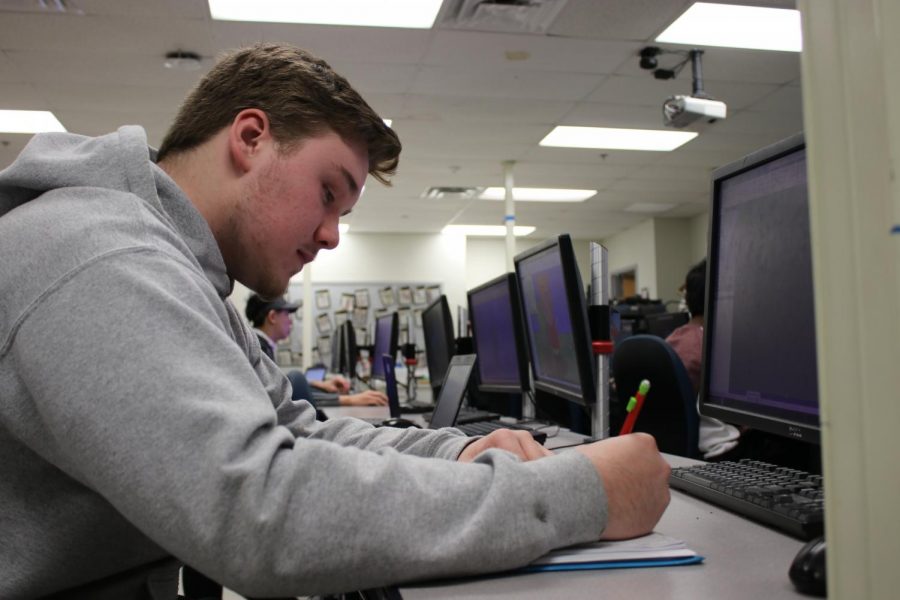 Andy Oitker, junior, tries to stay focused while he works on an in-class assignment. Trying to stay afloat after his parents divorce, he said he has become more mature and independent, often doing his homework without assistance, completing chores around the house, and making his own meals. "I'd say my grades have improved since I've gotten this past me," Oitker said. "I have more time to do homework, and I'm more focused because it's one less thing in the back of my mind all the time. Overall, I'm ready to do more."

For Andy Oitker, junior, the Oxford dictionary definition of divorce, the legal dissolution of a marriage, lacks depth as to how his life as a teenager and student has been transformed by parental divorce.

Oitker is one of the 1,709,000 children ages 15-17 who live with a single, divorced parent in 2019, according to the US Census Bureau. At the age of two, his parents separated, which resulted in a weekly, and sometimes inconsistent, visitation schedule until he made the decision to live with his mother full time September of last year.

“All I knew was back and forth between my parents,” Oitker said. “After I left my dad’s house, I would say I’m a different person. It’s easier for me to live life happily. Back then, I was a really negative person, and I started to be very confused in life.”

Another study by Brittany Pittelli, a student of University of South Carolina, found young adults with divorced parents were less likely to and educationally disadvantaged in achieving a graduate degree than those with intact families.

The findings of a Aga Khan University School of Nursing and Midwifery study on divorce concluded the child and single-parent struggle to maintain their mental health, self-esteem, and confidence, which could cause one to develop psychological and behavioral problems.

Oitker said the brunt of his parents’ divorce began to negatively affect his behavior, and he was uncomfortable, insecure and stressed.

In the recent past, for Oitker, paying attention in school was more difficult with lack of contact with his parents and times of distress.

“Anytime where I had to sit down, focus and not think about anything else while reading a long paragraph to interpret it was very hard because in the back of my head, I knew my parents were still fighting,” Oitker said.

Brenda Casey, social worker, said a student’s adaptation capabilities after divorce largely depend on how the parents behave, but each person will report a different experience.

Casey said if a student’s parents are in crisis, keeping note of grades, being of academic assistance or creating an atmosphere suitable for the child can be dusted under the rug to address more crucial problems.

The lack of consistency, she said, can negatively affect one’s academic performance, social interaction and health.

“There’s also differences between rules in the home, sleep patterns and who they can hang out with,” Casey said. “All these things can lend itself to anxiety. Even extreme sadness piled on top of these other factors can put someone in a depressed state. But for a lot of people, you will act out.”

For these reasons, Casey said it is important for students to seek individual, professional support from their general practitioner or a counselor to discuss the effects of divorce.

She said professionals should be responsible for change in how schools help students as teachers don’t have time, or confidentially, to handle a student’s emotional issues in this academically competitive district.

Due to the disproportionate ratio of students to therapeutic assistants, she said there is room for improvement to hire additional social emotional personnel.

“Really, the truth of the matter is that we are an educational facility,” Casey said. “What we really should be doing is hearing the concerns, dealing with the emotional issues and connecting with the parent. Our job is to educate, we are not a mental health facility.”

Laura Dorris, junior, said she also feels the effects of her parents’ divorce when four years ago, Dorris and her mother separated from her father.

Dorris said she witnessed her parents’ tension and daily conflicts, which continued after the separation.

“It was hard trying to keep myself out of their problems because I wanted so much to make things work,” Dorris said. “Overall, the way they interacted around me has taken a toll on my emotional health.”

In the worst periods of their divorce, Dorris said her academic and social life started to decline as she lacked motivation, which contrasted her more studious, middle school persona.

“It’s hard to feel like anything else is important when the two most important people in your life are hating each other,” Dorris said. “Social life was hard too because I was scared to ask to hang out with my friends when my parents were fighting.”

She said their conflicts caused her to feel anxious and depressed, and she suffered from low self-esteem and sleep deprivation.

“Those things have affected me from before the divorce all the way until now, and it’s gradually gotten worse,” Dorris said. “It’s hard as a teenager to go through this because you’re already dealing with so much and to put divorce into the mix makes it hard to balance it all.”

Dorris said her ideal future education isn’t guaranteed because of her parent’s lack of financial support and split incomes, and it’s difficult to connect with those with more favorable academic circumstances and aspirations.

Beth Dorris, Laura’s mother, said a single-parent family is a challenging situation for a teenager because co-parenting isn’t always an option.

“I try to be more involved in the absence of her father,” Beth said. “Unfortunately, my daughter has seen and heard more of her parents’ relationship than she needed. This has given her insight into the person she wants or doesn’t want to be.”

Beth said she tries to be open and honest with her daughter as well as keeping a calm household. In turn, she said her daughter has been able to become more focused in social and current events and make informed choices for herself.

Laura also said some of her teachers were instrumental in assisting her on a personal level.

“Someone’s mental and emotional health should take the number one concern,” Dorris said. “For teachers to want to help and make an effort to understand what is going on would have a good impact on students and probably allow them to try harder in school.”

Dorris said it can be difficult for teachers to connect with students each semester, but due to their frequent interactions, it is vital to still reach out to students or to consider training programs to inform teachers about the effects of divorce.

The entire school, she said, should be involved in creating a caring atmosphere for struggling students.

“School is very cut and dry, and when you’re going through problems that take such a toll on you, it’s hard to adhere to specific rules and cyclical lifestyle,” Dorris said. “If they took more time to acknowledge every kid has something going on in their life, that would improve how students feel at school.”