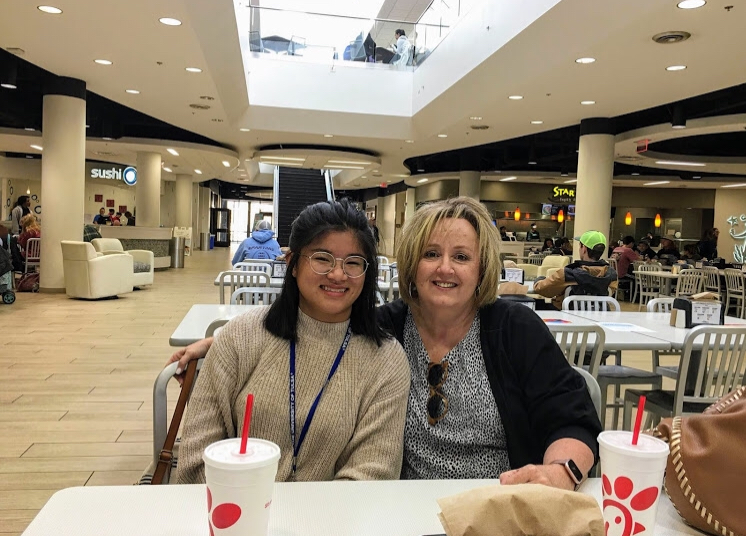 Madison Fischer, senior, enjoys a meal from Chick-fil-a at the mall with her mother. “Being adopted has given me more perspective on being a foreigner and a minority in America and how lucky I am compared to many immigrants that never get a chance to come to America legally,” Fischer said. Photo used with the permission of Madison Fischer.

Madison Fischer, senior, was adopted when she was 10 months old. Originally, she was left in a box at a government center in China and it was there that she was found and taken to an orphanage.

When Fischer’s family adopted her, they were handed a note with her birthday on it, April 5.

Yet, every year, her family celebrates on Feb. 10, the anniversary of the day she was adopted. Fischer said her family combines her “Gotcha Day” with her birthday, on April 5, because they are close in proximity.

Gotcha Day is the anniversary of the day in which a person is adopted. It is also called “Homecoming Day,” “Family Day” or “Adoption Day.” The date may be different from the date on which the legal adoption becomes final. November is national adoption month.

Although Fischer said she has enjoyed all Gotcha Days, her favorite was the most recent one.

Being adopted has made me even more thankful for the opportunities that I’ve had in America and the second chance I’ve been given by my birth parents by making the ultimate sacrifice of giving me up.”

“My family had started the discussion about going back to China,” Fischer said. “I took a DNA test to find out more about my heritage.”

The DNA test revealed that she is 99.7 percent Chinese and she is from the Jiangxi Province. She was unable to locate any family members.

Fischer said being adopted has given her a valuable and different perspective on life.

“Being adopted has made me even more thankful for the opportunities that I’ve had in America and the second chance I’ve been given by my birth parents by making the ultimate sacrifice of giving me up,” Fischer said.

“We are the lucky ones to have her as a daughter,” Debbie said.

Noreen Bigelow, director of Adoption Learning Partners, said there are many benefits to adoption for all involved: the birth parents, the adoptive parents and the adoptee.

“For the birth parents, making an adoption plan may give them an opportunity to achieve goals such as going to college or taking care of children already in their home,” Bigelow said. “People who make an adoption plan are doing it to provide the best for their child. For adoptive parents, the gains are immense – they have a child to love and take care of. For the child, the benefits are a loving home, the feeling of being wanted and a sense of permanence.”

Bigelow said the term Gotcha Day has a negative connotation to some.

“At best, it seems focused on the parent – when they got you – like you are a possession,” Bigelow said. “At worst, it connotes kidnapping, like ‘I caught you.’ There’s an uncomfortable history of coerced adoptions, indigenous families torn apart, etc. that play into this.”

Despite the negative connotation behind the term, Bigelow said it is still important to celebrate Gotcha Day.

“I think it is always positive to celebrate forming a family,” Bigelow said.