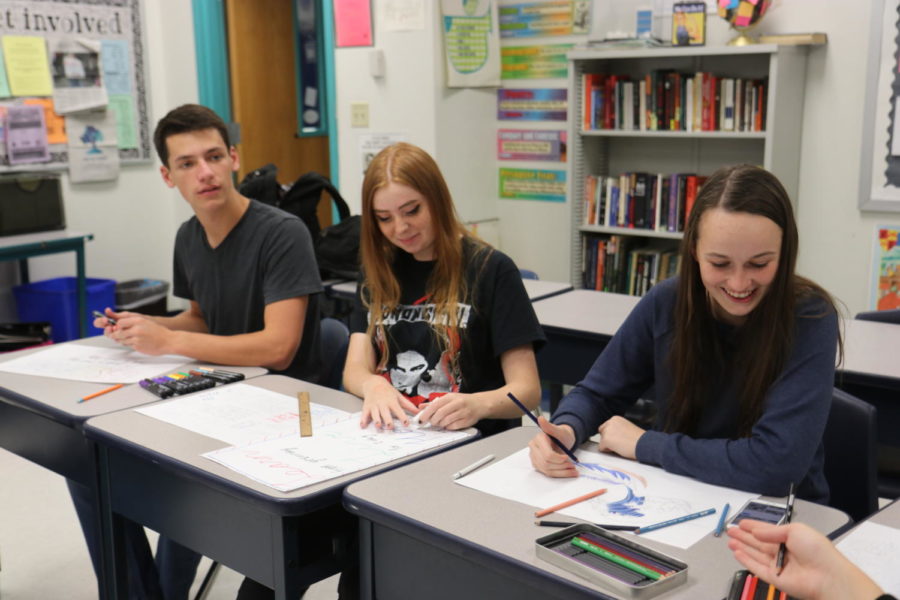 M4MH members left to right are senior Zach Streicher, junior Laura Dorris, and senior Annie Getts. Club members took additional time outside of Flex meetings to design inspirational posters to be displayed in bathroom stalls this month. The students spent time playing music, coloring their posters, and enjoying each other's company. “So far our meetings have been very educational, and this is much more interactive for everyone," Getts said.

Suicide is now the second leading cause of death for people 10 to 34 years of age, advancing from its placement of third in 2017, according to the Centers for Disease Control and Prevention, leaving the nation worried about the safety and future of the youth.

The pair renamed it Mustangs for Mental Health (M4MH) to better convey their message: mental health awareness and suicide prevention are important to students and staff.

“When we conceived this club, we had a lot of trouble getting it off the ground because mental health was this scary thing,” Bauman said. “Administration wasn’t really sure what our goal was, and we had to reassure them that no, we are not therapists, we are not counselors, our job is to educate and spread awareness. That’s when administration got behind us.”

Bauman said she aspires to relax the stigma around mental illness and to provide resources to those in need. She said her contribution has become a passion project, and her participation has a dramatic effect on her perspective of mental health.

Bauman was motivated to create a space for students to express their feelings after losing students in the past and seeing its ripple effects.

To prevent such times of distress, Bauman said she wants people to be more open and social so they can be aware of someone’s mental and emotional state.

“One of my goals in class and in the group is to try to give people an outlet to also reach out to others and create connections,” Bauman said.

Addressing the increase in suicide and self-injury for youth, Bauman said she emphasizes the phrase, “If You See Something, Say Something,” as someone could be subtly crying for help. Understanding the difference between normal human emotions such as occasional sadness and mental disorders is important, Bauman said.

She also said a move to erase the stigma surrounding mental health has recently been initiated by teachers.

Bauman dealt with a loss in her immediate family this year resulting in her own depression.

“I struggle to overcome that sometimes,” Bauman said. “But for me that’s part of the grieving process.”

Senior Annie Getts, communications officer of M4MH, said the club is often in conflict with non-supporters of the club who refuse to acknowledge rising teen mental illness as a serious issue. Getts said this makes her motivated to fight back and promote a safe atmosphere for people struggling with their mental health.

During last May’s Mental Health Awareness Month, Getts said some of their flyers containing hotlines and resources were ripped, spit on, used as gum wrappers or thrown on the ground by students.

“When people make fun of a situation we are trying to help get the word out, it hurts the cause,” Getts said. “When someone’s laughing at a suicide day that we’re doing, someone who’s feeling suicidal doesn’t want to talk about it because they don’t want that backlash.”

Getts said the academically competitive atmosphere at MHS can have a negative impact on a student’s mental health and needs to be considered.

M4MH meets are held on day A3 (Regular A day Fridays) during Flex block 1 in Room 220. The sponsor and leaders of M4MH emphasize seeking professional help. Confidential help is available for free. If you or someone you know is struggling, please contact National Suicide Prevention Lifeline or call 1-800-273-8255. Contact the NAMI HelpLine by calling 800-950-NAMI. In any emotional crisis, find help by texting “NAMI” or “HOME” to 741741.

“It’s great to have good performance at this school, but it’s about how we approach each other and talk about ourselves,” Getts said. “Everyone kind of talks down on themselves or others based on grade point average or test scores, but it’s just a number. There’s too much emphasis on those numbers, and it’s important to understand how to cope with that.”

Getts said societal barriers around minorities and neurological issues and gender stigma towards males hinders their ability to speak out and feel accepted. In spite of this, she said male students have taken up seats at their meetings, unlike last year, with little to no male attendance.

Junior AJ Berger, a first-time member of M4MH, said he enjoys being apart of the group because of the smoothness and structure of each meeting, the active involvement and engagement amongst members, and the openness for discussion about the information provided.

“One thing the club has done very well is open my eyes to new ideas and perspectives on topics that have been important to me for a long time,” Berger said. “Awareness of perspectives is important for me because things that might not bother me can really affect someone else.”

Berger said he appreciates the club’s push to erase the stigma around mental health, especially for men, as he said he feels there’s a push for men to withhold their feelings as they grow older.

“There’s nothing wrong with talking about your feelings or understanding other people’s feelings because it makes us more well-rounded,” Berger said. “It was embedded in me at a young age to speak my mind. I’m not any less of a man or any more of a man. It’s important to see that nothing changes just because I’m the guy in the club instead of a girl.”

He also said M4MH inspired him to continue advocating for mental health awareness and helping others in the future.

Senior Grace Clutts, president of M4MH, and others like Berger emphasize not being afraid to join the club because anyone will be embraced in a welcoming environment.

“That’s why M4MH is important. While we can only do so much, it’s something and it’s a start,” Clutts said. “If you get into the mindset that you need to start accepting help and needing help, that is the first step to getting better.”

Clutts said meeting events can range from group activities to educational speakers or presentations from teachers or organizations like the National Alliance on Mental Illness (NAMI). She also hopes to center a new meeting around anxiety disorders.

Clutts and other club members have also prepared for a bathroom beautification, and they are in the process of laminating their posters for future placement. Their decorations will center around mental health awareness, and each restroom will be assigned to members to work on afterschool.

Improving Wellness Day is another goal of M4MH as Clutts said last year it was diminished by the April 2 ACT and the lack of information given to students. This year, the event will likely be around the same date, but the leaders said they plan on being clearer with their purpose and spreading the word online and in school.

Clutts said she hopes the existence of the two mental health clubs, M4MH and National Alliance on Mental Illness (NAMI), sends a message and displays importance for suicide and mental health awareness.