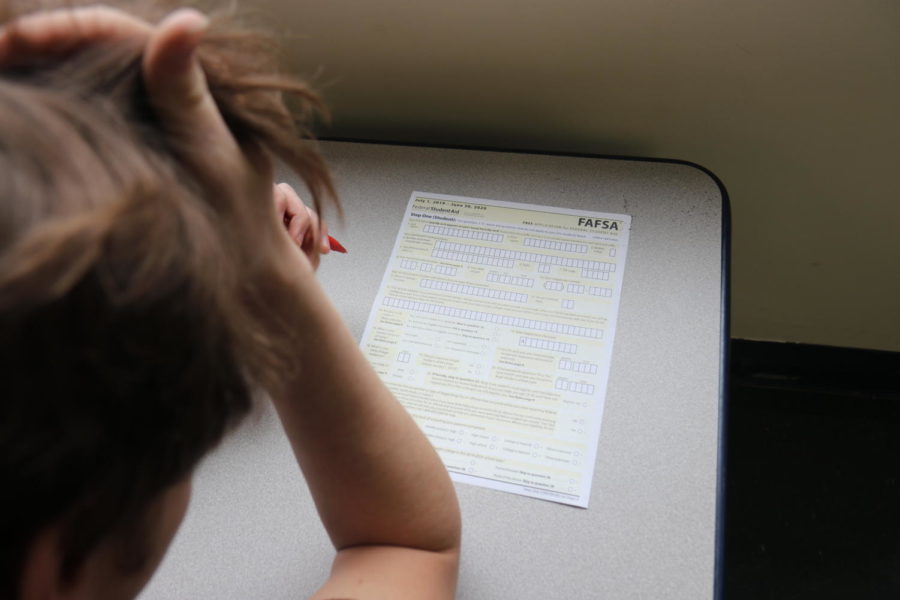 Kevin Wang, junior, said he wishes to attend a prestigious university, but he also knows that attending such a school would be financially irresponsible for him and his family.

“I definitely think there are many intelligent students who are very capable of going to these prestigious universities, Wang said. “It’s just that perhaps it’s not the most financially viable thing.”

According to the Institute for College Access and Success, there are 44 million Americans who owe student debt, collectively owing $1.5 trillion. Wang said he fears he’ll bury himself in debt pursuing his desired education.

Wang said that while the financial aid system can be extremely helpful to impoverished families, it doesn’t do enough to aid those stuck in between poor and rich on the socioeconomic ladder.

“For upper class applicants they don’t normally have to worry or care too much about financial aid, but for those right in that middle class range, the cost of living and the cost of tuition in an Ivy League college could reach $79,000 per year,” Wang said. “For a lot of families a financial aid package of $30,000 to $40,000, which is a lot of money to have taken off of your tuition every year, still just doesn’t cut it.”

The College Board reports that two-thirds of students in the United States will use a form of financial aid. Wang said that financial aid is very important for determining which schools to apply to in the college applications process.

“I think the majority of people need financial aid,” Wang said. “I’m kind of counting on it.”

Vinai Kumar, Class of 2018, is an undergraduate student at the University of Pennsylvania. Kumar said  financial aid is important and that applying for it made his college experience affordable.

“I was definitely worried about tuition, but after looking at the financial aid options and what the purpose of an Ivy League school is, I felt less worried,” Kumar said.

While supporting the need-blind admissions system used by Ivy Leagues schools, Kumar doesn’t believe that it specifically benefited his application. This system causes admissions officers to be unaware of an applicant’s financial standing when either accepting or rejecting their application, limiting the college’s ability to discriminate based on ability to pay tuition.

“Personally, I don’t think it made a difference being need-blind or not because I’m not at either polar extreme,” Kumar said. “The University of Pennsylvania’s bottom line is ‘Will this person pay tuition?’ The question of how I’ll pay relies more on me.”

Through the need-blind system of admissions, colleges are forced to look primarily at an applicant’s qualifications as the basis for acceptance.

“Some people will be able to pay it out of pocket, some will take out loans, but I think this need-blind system is best because you’re taking people solely off of merit,” Kumar said. “I think that in the end, by making it merit based, you’re selecting for people who in the end will be the most successful and will give back the most to the school.”

Kumar is currently enrolled in a dual major program for degrees in biology and economics. He said that the rare program was a deciding factor in choosing to attend the selective college.

“Plenty of arguments can be made that it’s better to go to in-state school, and I think for each individual it’s different,” Kumar said. “In my case, I really saw the benefit of going to a top tier school in terms of the type of job I could get and what field I want to go into.”

Kumar admitted he could’ve saved money by attending a school that would give him merit scholarship, but he said that attending the University of Pennsylvania is worth the added price.

“For me, it was a short-term versus long-term decision,” Kumar said. “In the short term, I would have to take out loans, but in the long term, the degrees, the opportunities, and the Ivy League experience would outweigh the costs. It’s those long term benefits that I’m willing to pay for.”

Though attending the University of Pennsylvania is granting Kumar the rare opportunity to earn two degrees, Dawn Michel, college counselor, cautioned that attending a prestigious school might not be the best path for everyone.

“I truly believe that, even though some people are totally infatuated with rankings and the name of the school, it’s what you make of your college experience,” Michel said. “Do I think you can go to a state school in Missouri or elsewhere and get a great experience and end up in a great place and still reach all your career goals? Yes, I do.”

To Michel, acceptance or rejection from one of the country’s most prestigious schools isn’t endemic of a level of intelligence but of the improbability of admission within the process.

“A lot of our students may be able to intellectually compete for the Ivy Leagues, but they may or may not be accepted due to the selectivity of those schools,” Michel said.

Michel stresses that one of the key factors to think of when applying to colleges is to consider if you could attend that school, and if it’d be financially sound to do so.

“Finances are something I make absolutely sure that I mention when talking to students about a school that’s the right fit for them,” Michel said. “It’s not about if they’ll be happy there, if it has their major, if it’s a good location, but also does it fit their family financially? What I hate to see happen is a person gets to second semester senior year and they have only few options on the table, all of them not financially being in reach of their family if they haven’t thought about that.”