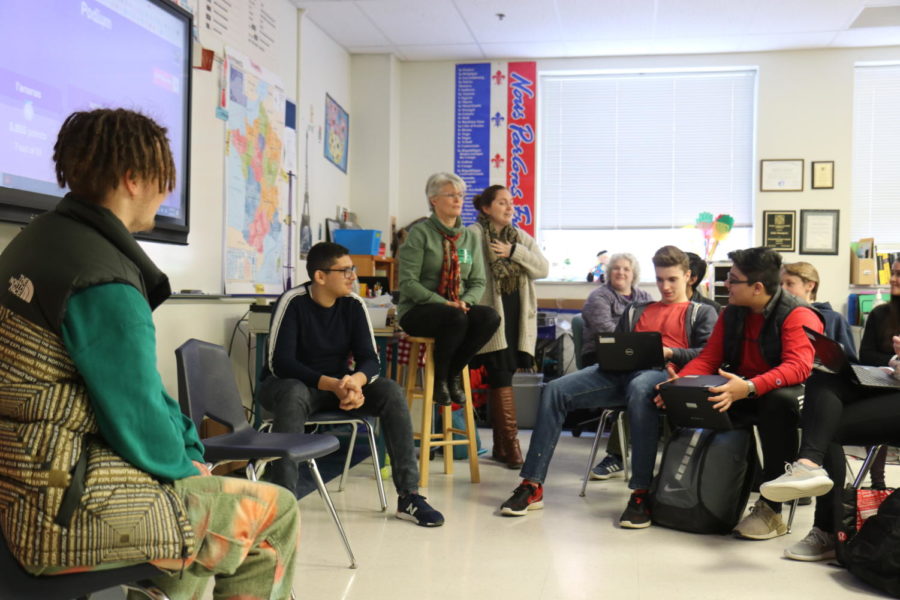 [Left to right] Quentin Nauge and Salim Saoud, juniors, speak to students in a french class after giving a presentation on on cultural differences between the U.S. and France.

As part of the host program Language and Friendship, two exchange students from France visited MHS for three weeks from Feb. 19 to Mar. 6 to experience American life and education.

Language and Friendship’s mission is to “serve language teachers and their students and to promote global citizenship through quality educational programs including short-term travels, language-immersion family stays and hosting opportunities,” according to their website,

“It’s always interesting to get a new perspective regardless of where the person may be from, especially in other countries where it is so different,” Gandhi said.

Gandhi said hearing the perspectives of the French students was his favorite part.

“I think that the foreign exchange student program is pretty important, especially since most people may not have the opportunity to visit other people or go out of the United States,” he said. “I think it’s really effective in bringing people from other cultures to the classroom and allowing other students that kind of interaction with people from other countries.”

One of the exchange students was Salim Saoud, junior, who said that one of the biggest cultural differences in education was how strict the school environment is.

“In France we don’t have computers,” Saoud said. “We can’t speak with people [during class]. We can’t have fun in the school.”

Even though he enjoyed the freedoms American students have, Saoud said the firm rules do have benefits.

“Here it’s a good education, but in France it’s very strict,” he said. “When you don’t have your phone you can study.”

Quentin Nauge, junior, also commented on the amount of freedoms students are allowed in American schools compared to French schools. He said many of the differences are due to the class sizes.

Despite the larger amount of students, Nauge said his experience at MHS was a good one.

“I think my English is going to be better,” he said. “And now I know how you live in the United States.”