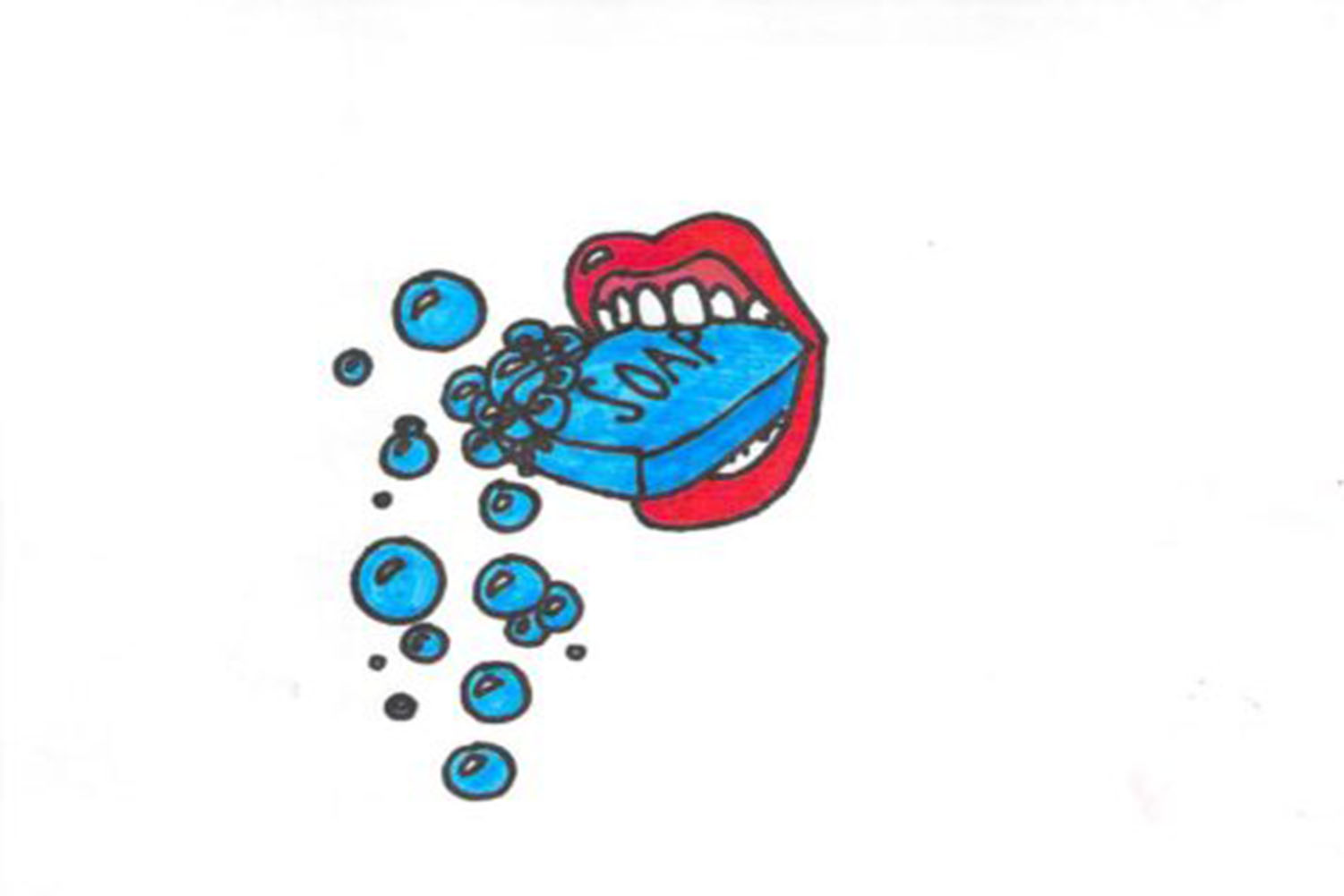 A play on the tradition of washing a kid's mouth out with soap after he/she swears. (Media by Jilian Bunderson)

A play on the tradition of washing a kid's mouth out with soap after he/she swears.

The Swear Culture of Marquette

Walking through the halls, there’s a buzz of gossip, stories and talk of fun weekend plans. But there are those several words heard through the halls that cause a mixture of emotions – swear words. Whether they make you cringe, agree or debate, swear words are prevalent throughout MHS and controversial among many.

One student who disagrees with the controversy behind these swear words is Ellen Resek, junior.

“As far as the principle of swearing goes, I think it’s kind of stupid – these are literally just random words people have made to have such a negative or strong connotation, and they wouldn’t be ‘bad’ words if someone didn’t tell us they were,” Resek said.

Although Resek said these simple “bad” words aren’t actually all bad, she still disagrees with the use of swearing in a high school setting.

“I don’t think swearing in necessarily a good habit to have because it actually does offend some people, and that’s why I try not to do it,” Resek said. “But the offense with swearing just bothers me as a concept as a whole.”

I don’t think swearing in necessarily a good habit to have because it actually does offend some people, and that’s why I try not to do it.”

Resek also said swearing is consistently increasing and growing in popularity due to several reasons.

“I think with certain social media outlets, swearing is becoming more popular because younger kids are seeing people do it and they’re having more exposure to it and they’re normalizing it which I don’t necessarily think is a good thing,” Resek said.

Junior Principal Rick Regina includes his own form of “dealing” with students who use this type of disruptive language.

“In my situation now, when I hear a student use foul language, typically I’ll pull them aside and say, ‘Knock it off’ or I’ll get in my former English teacher mode and say, ‘Hey, can you select a better adjective than that one you chose because that word just didn’t fit’,” Regina said.

“Now, with cell phones because of communication, it’s definitely a bigger part of our language and it’s more accepted because it’s not as jolting,” Regina said. “When I was a kid, if you heard someone say the ‘F’ word it was a jolt – like you knew what it was. Now, you hear it often, you become almost desensitized to it and even in television shows, words that were completely unacceptable 20 years ago on TV – now they are and now you can turn on and hear them on primetime television at just 7 P.M.”

…Words that were completely unacceptable 20 years ago on TV – now they are and now you can turn on and hear them on primetime television at just 7 P.M.”

Along with this desensitized generation, Regina also said that faster and easier communication also contribute to the increase of this foul language.

“It‘s a unique situation because we hear it so often because of social media and because of how quickly communication gets spread,” Regina said. “It’s not as jolting to hear those words anymore like it used to be 15-20 years ago.”

Regina lastly gave his personal beliefs that while the popularity and reliance of swear words has grown through the years, there are often many other words that could be used in their place.

“As a former English teacher, there are better adjectives and better verbs that students could use,” Regina said. “I think with swearing, I don’t want to say there’s a time and a place, but back in the day, if someone swore they almost did it for a fact and now they just do it. I think you could choose a better adjective than going back to the normal one that starts with the letter ‘F.’”

“I swear in stressing situations just because it’s kind of way to do away with the negative energy that you’re feeling and just let it out,” Behrens said.

This “discharge of energy”  is a common appeal of swearing to many students, but there are still many who would prefer not to hear these words being said.

“I have never had someone ask me to not swear around them, but I do try to refrain from cursing in front of people that don’t like swear words,” Behrens said.

Behrens also said swearing is very prevalent among its students.

“If you walk around the hallways, you can always hear a swear word or two or many more, and people don’t ever hesitate to filter it,” Behrens said.

Whether it’s “good” or “bad,” swearing is still discouraged at MHS with its rules and among many members of its staff.

“People should have a filter, especially around school, just because you don’t know what other peoples’ beliefs are and it’s better to keep it neutral,” Behrens said. “Just think about what you’re doing and how it affects other people.”