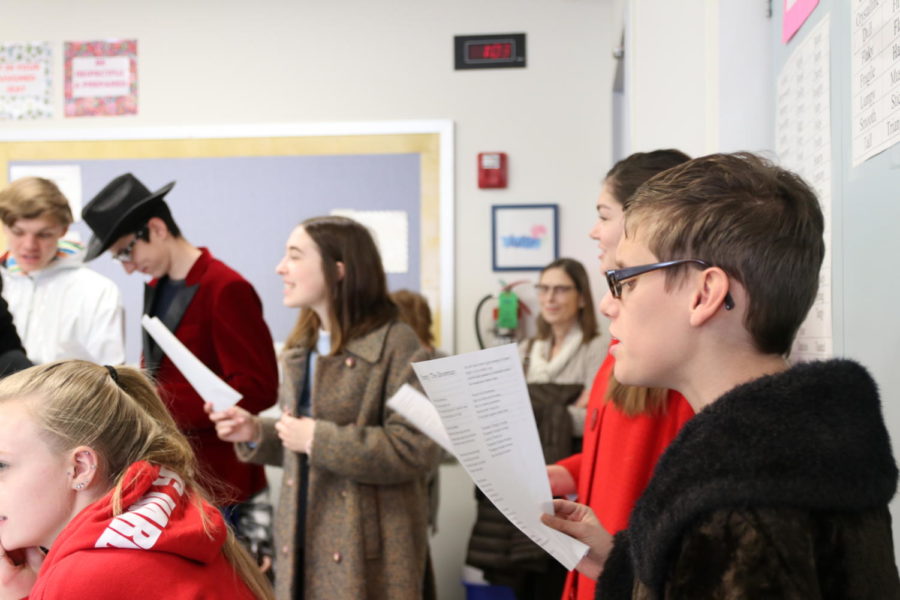 Acting 1 performs ¨Frosty the Snowman¨ in one of the FACS rooms during fifth hour on Tuesday.

“They came in with such a cheer that instantly made me feel happy and I really enjoyed the atmosphere they created,” Meier said.

The caroling that happened during the fifth hour block on Tuesday was orchestrated by the fifth hour Acting 1 class, which is one of the buddy/mentoring classes at MHS.

Mentor students who have previously taken acting classes lead lessons in the class and seniors Zara Abbassi and Madelyn Berzon had the idea of caroling.

“We were planning on doing something associated with Christmas songs after Thanksgiving Break, and caroling was just an additional idea that came to my head,” Abbassi said. “I didn’t think it would be that popular but seeing the kids this excited and the teachers so open to us caroling during their teaching time is amazing.”

This year, there is a designated Acting 1 class specifically for students that receive SSD services. The class is being  taught by Rebecca Blindauer, drama teacher.

Rebecca Blindauer, Acting 1 teacher, said she hopes caroling will promote good relations with the school and the students who receive SSD services.

“It’s such a fun and diverse mix of kids in this class and some of them are really shy and only work with some kids. It’ll be really interesting to see how they react to being out in front of the whole school,” Blindauer said.

Lindsey Scales, senior, is one of the students in the class. From the end of Thanksgiving Break leading up to Tuesday, Scales and her classmates have been practicing carols .

“Rudolph the Red Nosed Reindeer is one of my favorite songs and we practiced that alot for the big day,” Scales said. “I love caroling [with them] so much. Everyone around me is really happy today.”