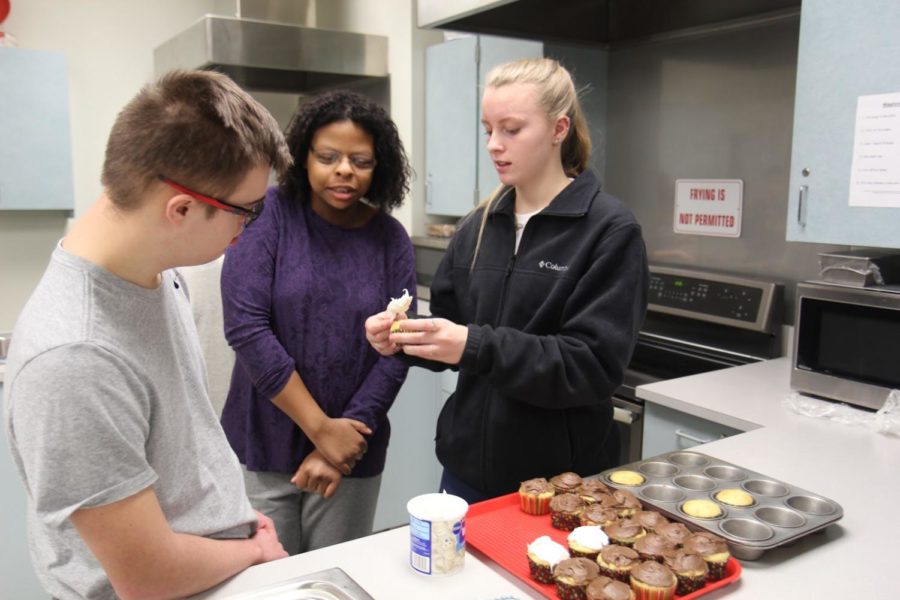 Mark Kohler, senior, is a friend to everyone he meets and accompanies his usual “Hey buddy!” with a smile and a wave and an occasional handshake.

Kohler has Williams Syndrome, a deletion of 26-28 genes on chromosome seven that affects physical and mental development with common symptoms being cardiovascular disease, learning disabilities, and a love for music.

“He couldn’t talk because he was really delayed verbally,” Becky said.“It took him forever to talk. We thought he would never talk. But he would make eye contact and just smile at people. He would be so engaging, just trying to get anybody’s attention in any way he could without words.”

Koehler is 1 of more than 270 students at MHS who are assisted by Special School District (SSD) services. Not only does SSD have their own schools, but they also operate in 265 schools in 22 public school districts in St. Louis County. SSD provides countless unique services to children with disabilities and their families, while still giving them a traditional schooling experience.

In 1957 when SSD was formed, many students, especially students with more severe disabilities, might have stayed at home or been sent to an institution instead of going to school.

SSD was created with the duty of ensuring that any special education or related services that a student might need to be successful would be provided to them. SSD provides students with the services outlined in their Individualized Education Plan (IEP) and also helps train teachers and staff in public schools, including general education teachers.

There are about 3,300 students currently attending SSD schools. In total, SSD serves about 24,000 students across St. Louis County, the majority of those students being assisted in their home schools.

Superintendent of Special School District Don Bohannon has worked in SSD for his entire 31-year career. As 2017 marked the 60th anniversary of the inception of the school district, he has worked there for more than half of SSD’s existence.

“It really is a testament to the community of St. Louis County,” Bohannon said. “The fact that the community cared enough to create a school district to ensure that all students, even students with a disability, would be able to get an education in their home schools, stay in their community.”

Students can receive an IEP if they qualify for any of the criteria on a broad eligibility scale. A learning disability, physical disability, impairment or even other health impairments are all examples of diagnoses that could qualify a student for an IEP. Most any situation that involves a student’s health that affects their ability to learn can be a reason for a student to have an IEP, Bohannon said.

Some students might need more special attention within their home schools, Bohannon explained, and can be taken out of a general education class and educated in a SSD classroom in the area they struggle. If a student is struggling because of a disability, specialized staff can provide services to help students live with their disability.

SSD staff help students learn to communicate, Bohannon said. Students who are nonverbal can work with augmentative technology that enables them to speak through programs on iPads or other devices. Those who are hearing impaired can work with audiologists and a cochlear implant team to determine what type of hearing assistance they need and learn how to live with the aid.

Sometimes a student needs more support than can be given in their home school, Bohannon said. SSD has seven schools including five separate public schools and two technical education high schools. These separate public schools are where the IEP Team, including students, parents, teachers, guidance counselors and administrators, works together to decide what type of an IEP a student needs.

Another mission SSD has is career and technical education. SSD is focused on a good transition process, involving their students in the planning of the steps to help students become what they want after high school, Bohannon said.

“In the future, I would love to see more cooperation between school districts and employers, like companies who hire our graduates and public agencies that support our graduates,” Bohannon said. “A real partnership to make sure that all of our students can have a really good outcome when they graduate. A job or going to college or going to the military. Just being able to be independent and take care of themselves. That’s what everybody wants.”

Amy Blumenfeld is the SSD area coordinator at MHS. While she is employed by SSD, she works entirely at MHS because of the large student population.

“I’m always looking at ways that we can increase the inclusion,” Blumenfeld said.

One of the ways students who receive SSD services are being included in general education classes is through co-teaching. Students with IEPs are put into  classes that they need assistance in, and are taught by both their general education teacher and an SSD teacher. For example, if several students are struggling in the same math level, they can be put into the same class. This system is in use because it doesn’t expose students with IEPs to any stigma and it keeps them in classes with their peers.

Two classes at MHS emphasize the inclusion of students with IEPS, Life after High School and Lifetime Recreational Sports. Both classes allow students with IEPs and general education students to interact and learn together on a daily basis as they work together to complete tasks. Blumenfeld said she has received positive feedback from both students with and without IEPs.

The MHS Theatre Company and SSD also teamed up to increase inclusion. Thirty students with IEPs and 30 students from the theatre program partnered up in September  and all day long and did different activities, learned a routine and performed for parents after school.

A new sports team also has been created at MHS to include students receiving SSD services. The Dazzlers is a dance team where Mystique members work with students to learn choreography, play games, make new friends and perform for friends and family.

The Dazzlers have performed at varsity football, soccer and basketball games. The Dazzlers perform at halftime shows along with cheerleaders, the marching band and Mystique.

The Dazzlers also will get to walk on Senior Night, an annual tradition where senior Mystique members, and now the Dazzlers, get to walk across the basketball court at one of the final home games of the season and be recognized for their actions on the team.

Eggmann said she hopes the Dazzlers program will continue to grow in members and develop over the years, and that more people would take notice of the Dazzlers at future events.

“It’s kind of opened our eyes,” Eggmann said. “We knew that there were a lot of special needs students at Marquette, but they have their own hallway and they’re separated from the people who go to classes over here. So it’s nice to see a different perspective and bond with people that we didn’t know.”

Both Eggman and superintendent Bohannon said that in their experience, the misconception that disabled people were not able to do things as well as other people was very untrue. Bohannon said that his Student Advisory Council has asked for their educators and administrators to challenge them and have high expectations for them instead of pitying them.

“It’s really not a disability, it’s just different kinds of abilities,” Bohannon said. “That’s really the biggest message, and if everybody had that attitude, I think the world would be a better place.”