Taking a look under the hood 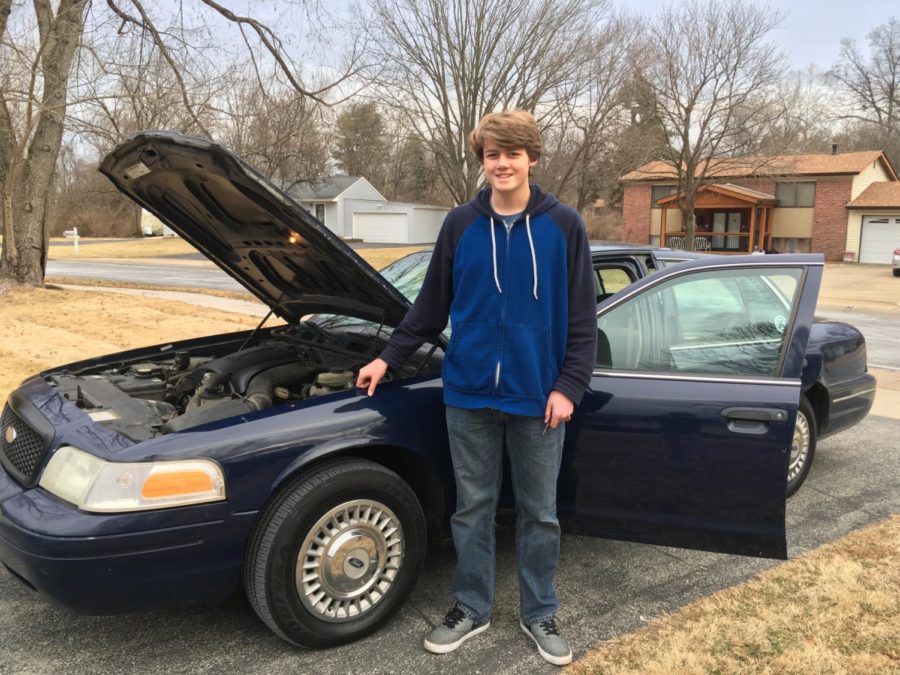 Chevys, Dodges, and Pontiacs are all car brands that Hawke Hood, sophomore, has repaired. After fixing cars for almost his entire life, he is refurbishing his a car of his own. Hood has been restoring a 2001 Ford Crown Victoria for about six months.

The Crown Victoria belongs to Hood’s mother and stepdad, but he plans to buy it from them.  Overall, Hood will spend $2,000 for the car in addition to about $300 in tools for working on the car, and he pays for these expenses by working at McDonald’s.

“I got the job because I wanted to get some money in the bank,” Hood said. “So that way I could have a little bit of extra money before I was 16, so I could work on my car.”

Heather Swan, Hood’s mother, said Hood’s grandfather gave him a Crown Victoria last June to work on. When it became apparent that the car was beyond repair, Swan bought him a car of the same model.

The new car only had 81,000 miles on the engine and transmission. Hood uses some of the original car’s parts to combine all of the good parts from each vehicle into one.

Hood said his model of the Crown Victoria is called a P71 because it says P71 in the car’s vehicle identification number (VIN), which is essentially a car’s unique fingerprint. The P71 is the police package, and has enhanced features such as a thicker sway bar, less body roll, stiffer springs, a tuned motor and 230 horsepower instead of 250.

After about 48 hours of work, Hood has replaced the seats, intake manifold, spark plugs and coil packs, among other small fixes.

“He is very committed to making the car better than what he received,” Swan said. “He definitely has a lot of focus when he’s working on the vehicle. He tries to put as much time aside to work on that. He encourages his friends to come over and help him when needed, or has them come over so they can all participate in doing some of the work on the car.”

Matt Herron, sophomore, is also interested in working on cars and has been helping Hood. The Crown Victoria is the first car Herron has ever worked on. He has helped take out the seats, buff the wheels and touch up on the paint on the grill.

“He teaches me what he tells me through experience and hands on work,” Herron said.

Herron said he plans to work on a car of his own when he gets out of high school because of this experience.

“He goes out there every day, as far as I know, and he’s always doing something new,” Herron said. “What he starts, he finishes.”

This won’t be the last car Hood will work on. He recently took a test at Saint Louis Community College to get into a program that will allow him to earn an associates degree in applied science in automotive technology while still in high school. If he is accepted, starting next school year he will leave MHS for half of the day to participate in the program.

Taking a look under the hood