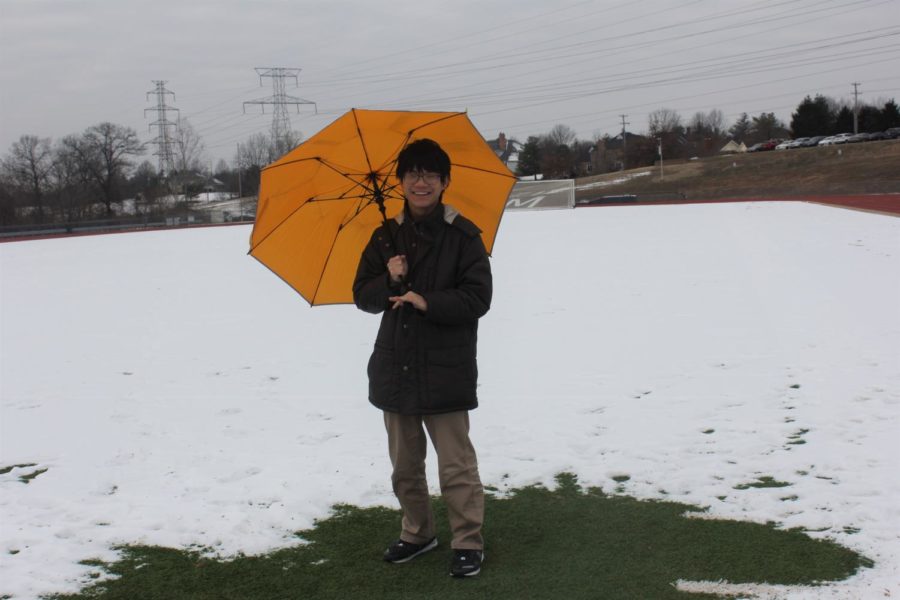 Clay Huang, sophomore, said he carries a yellow umbrella around with him in case it rains or snows.

Kavya Jain and Will Roach

Imagine the second hottest day of the summer in St. Louis. Now add rain, humidity and mosquitoes. This is how Clay Huang, sophomore describes the weather in Taiwan.

Huang, who moved to Taiwan at the age of six, returned to St. Louis before beginning his sophomore year for his education.

This winter was the first time Huang has seen snow in nine years.

“I thought [the snow] was really pretty,” Huang said. “And to be honest, I still think winter is prettier here.”

However Huang said his infatuation with snow was short lived due to its reality of inconvenience.

“Now my mom tells [my sister and I] to go outside and clean the car, which is covered in snow that turns into ice and is really hard to get rid of,” Huang said.

For Jaya Chitrakavi, sophomore, it is her first experience with winter in the United States.

Chitrakavi moved to St. Louis from Hyderabad, India last May where the average temperature in January is around 72 degrees Fahrenheit.

Chitrakavi said she’s usually an outdoor person, but the past few months the cold has made her feel very restricted to her home.

The cold isn’t as unfamiliar for senior Lou Baudy, an exchange student from France

Baudy said the winter in France varies depending on where you live. In Southern France, winter is milder and although it snows occasionally, it usually melts in the morning. However Baudy said she skis every winter in other parts of France where snow accumulates more.

“France is very small compared to the U.S. but you still have very different weathers depending on where you go,” Baudy said.

Besides weather in the winter months, Baudy said holidays in America are more intense than in France.