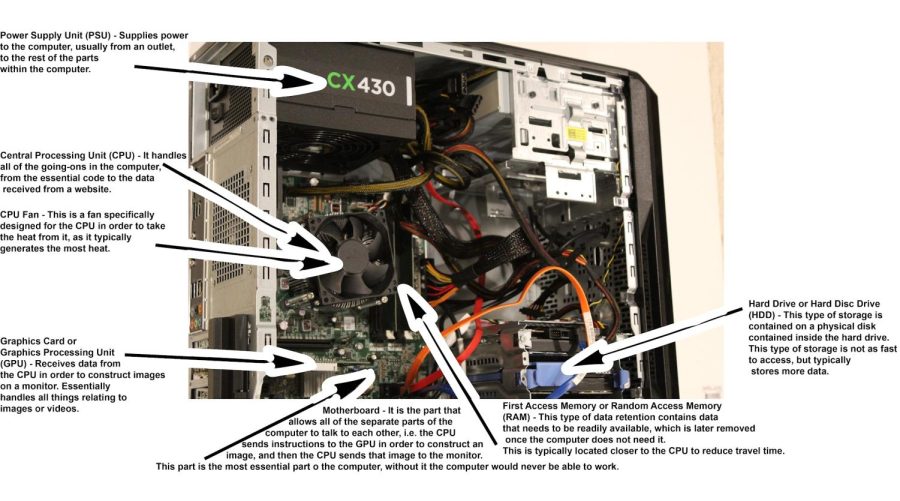 Many MHS students have started building their own computers. Carter Long, junior, built their computer (pictured above) by buying the appropriate parts and putting them together.

After quitting sports in 2013, Spencer Shank, junior, turned to a new hobby to fill his free time: building computers.

Shank began by taking apart and rebuilding them, and, since then, has built up to 200 computers.

“It’s a good learning experience from the start, and it’s a fun process to learn,” Shank said. “It’s a good hobby.”

Like Shank, a number of students and staff have either built computers from scratch or taken apart a computer to further understand the building process.

“I say that you try to do your best, and you’ll like what you get out of it,” Shank said.

Most of Shank’s parts come from Amazon, Best Buy or Microcenter. However, Shank said a shortage of parts is leading people away from building computers.

Though it started as a hobby, Shank said he now plans on majoring in either software or electrical engineering in college and hopes to become a computer engineer in the future.

Nathan Frankenberger, computer teacher, built a computer that lasted about three years. He said building the computer himself was surprisingly cheaper than buying a pre-built one.

“It was worthwhile, fun and engaging. It was exactly what I thought it would be,” Frankenberger said.

The process of building the computer wasn’t hard, Frankenberger said, because the pieces fit together in a specific way. It took approximately an hour to complete.

Frankenberger said building a computer helps individuals learn the different parts of the software and how they connect together. He recommends experimenting and building with old computer parts to become familiar with the process.

“I think everyone should do it at least once in their life,” Frankenberger said.

He said he noticed gamers are more likely to build a computer because it then becomes customizable and can include features that make gaming easier.

Jeff Minnis, CEO of Jeff Computers, began fixing computers in 1994 by helping people with computer issues or building custom computers. From there, he grew his passion for technology and started his own business, opening a store in 2006.

For beginners, building a computer can take up to a day, Minnis said.

Minnis said the hardest part is picking out the best quality computer parts for the computer because there are so many available.

The actual process of building the computer is not particularly difficult, he said, as long as the individual follows the instructions and has plenty of time to assemble. He recommends having extra components on hand in case the computer runs into a problem during building.

“The best way to learn is through experience, doing things and just learning a little bit at a time,” Minnis said.