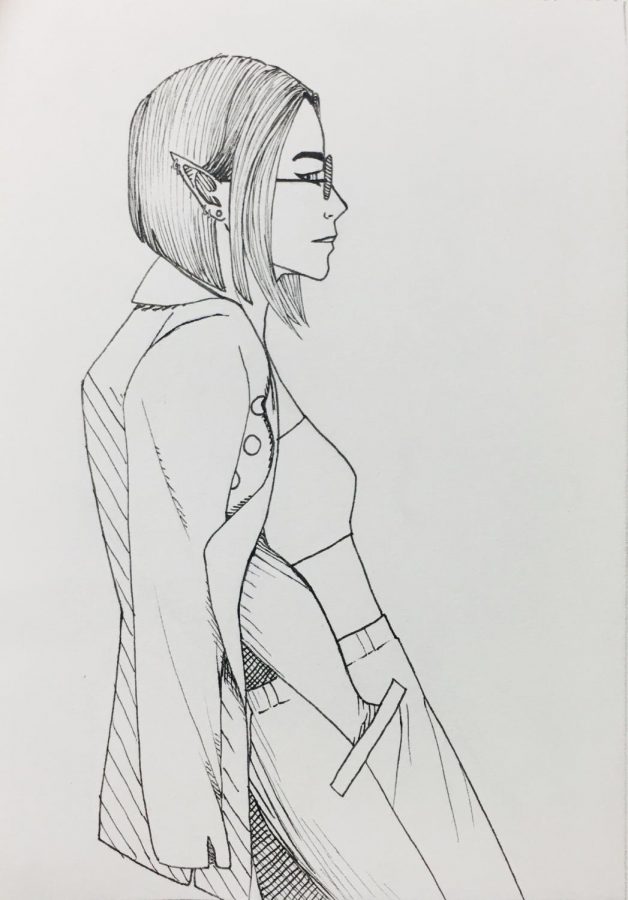 Zoe Lloyd, junior, drew this illustration for the Day 2 prompt, Suit. It takes Lloyd about an hour to do each illustration, depending on how inspired she is as well as how intricate the drawing is.

As Keaton Mabie, junior, saw his friends work on prompts for the art challenge of Inktober, he became interested. Mabie does not have much experience with drawing, so he wanted to use this challenge to work on his drawing skills.

“It’s relaxing and I have a really creative mind, so it’s fun to put that down on paper,” Mabie said.

Inktober is an art challenge during the month of October that focuses on getting people to share their art. Artists are given a different art prompt everyday to create a drawing based on that prompt, which they can post on social media under #inktober.

Mabie said he has not been able to participate as much as he’d like to because of school.

“This is a month of just trying my best,” Mabie said.

He’s worked on three or four prompts and plans to practice and improve before he does the challenge again next year.

Layla Shockley, freshman, who started drawing in first grade, heard about Inktober two years ago from social media and started the challenge last year. Although Shockley gave up halfway through last year, she has participated in Inktober every day so far.

“It was a good distraction, but as I got better, it became a way to set goals for myself,” Shockley said.

She likes to draw realism, but if she is doodling, then prefers a more cartoony style.

She said she likes making the drawings but the commitment can be hard.

“Sometimes it’s difficult and sometimes the prompts are hard to interpret,” Shockley said.

Zoe Lloyd, junior, started doing Inktober two years ago when she heard about it from the app Amino.

She said she enjoys doing it because it is a way to challenge herself to draw things she normally would not draw.

“It’s kind of cool to look up reference photos of stuff I don’t usually draw and just learn how to make it,” Lloyd said. “And it’s fun.”

In years past, she would participate everyday until she failed a day and stopped doing the challenge. This year, Lloyd hasn’t been able to draw every day because of school, but is going to keep doing it when she has time.

She tries not to look at the prompts ahead of time because she said she likes coming up with the idea of her drawing the same day. When Lloyd does a prompt for Inktober, she starts by searching up the word to see different ways she could interpret it for inspiration.

Melissa Wilson, art teacher, heard about Inktober a few years ago when one of her Drawing 1 students participated.

While Wilson has not participated because she said she does not have enough time to commit for a month, she said Inktober is a good way to encourage creativity with artists.

“I think anything that can help promote and encourage the arts is a good thing,” Wilson said.