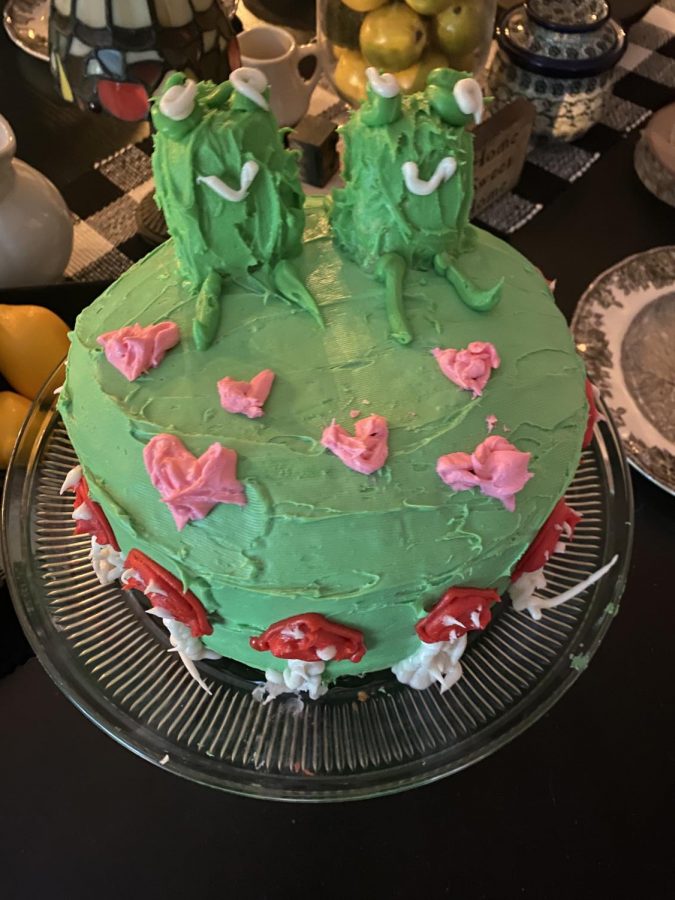 Begin the judging process. Whichever cake is closest to the respective design inspiration is the winner.

My sisters have recently developed a newfound passion for baking, and, as a result, Tik Tok has become a source of food inspiration for me.

On my own For You Page, I have seen a definite increase in popularity of people becoming creative in the kitchen while cake baking. With the house always smelling good as a result of my sisters’ endeavours, it was only a matter of time before I gave in and took a shot at one of these trends.

I chose to conduct a cake competition to replicate professionally designed cakes.

To start, my immediate family of six split into pairs and began looking for design inspiration while my cousin decided to work separately at her house.

Although it is spring, my sister and I decided to make a Christmas tree shaped cake, and I headed to the store with my mom to purchase the essentials: cake mix, sprinkles, piping bags and piping nozzles.

We got up bright and early with our designs at the ready to first bake the cakes, adding water, vegetable oil and eggs to the cake mix.

We took turns placing them in the oven at the temperatures they were supposed to bake at and ended up baking three full-sized cakes and five smaller ones. The baking process took about three and a half hours in total, and afterward the cakes cooled in the refrigerator.

Then, it was competition time.

We committed the entire day to working on the cakes, but only planned to time the decorating portion.

We set the timer for exactly an hour and began decorating. I quickly started building the cake and creating green frosting by adding food coloring. Adding a layer of frosting between each piece, my sister and I began stacking upward with the cake held together by a long skewer stick in the middle.

Meanwhile, my dad preheated the oven, and my sister began to shape cookie dough to be the star on top of our cake. The frosting ran out quickly, so we kept making more and slathering it around our cake until most of it was covered. We then began to add sprinkles all around the cake to serve as our ornaments.

After the star finished baking, we placed it on top of the skewer and called it quits on our mess of a cake.

The rest of my family finished up their respective cakes, and my cousins headed over with a cake of their own to enter the competition. My grandparents served as our judges, and we lined up all the cakes along the table: a Christmas tree, a cardinal’s baseball mitt, a bucket of popcorn and a frog pond.

After some discussion, it was decided that the bucket of popcorn cake stayed most true to the inspiration piece and was the winner.

I recommend this activity for anyone looking for a good time. The competition is a fun way to ignite some friendly competition through a task that proves difficult for those who do not design cakes. Though it makes quite a mess, the end result is a delicious and fun experience to share with others.