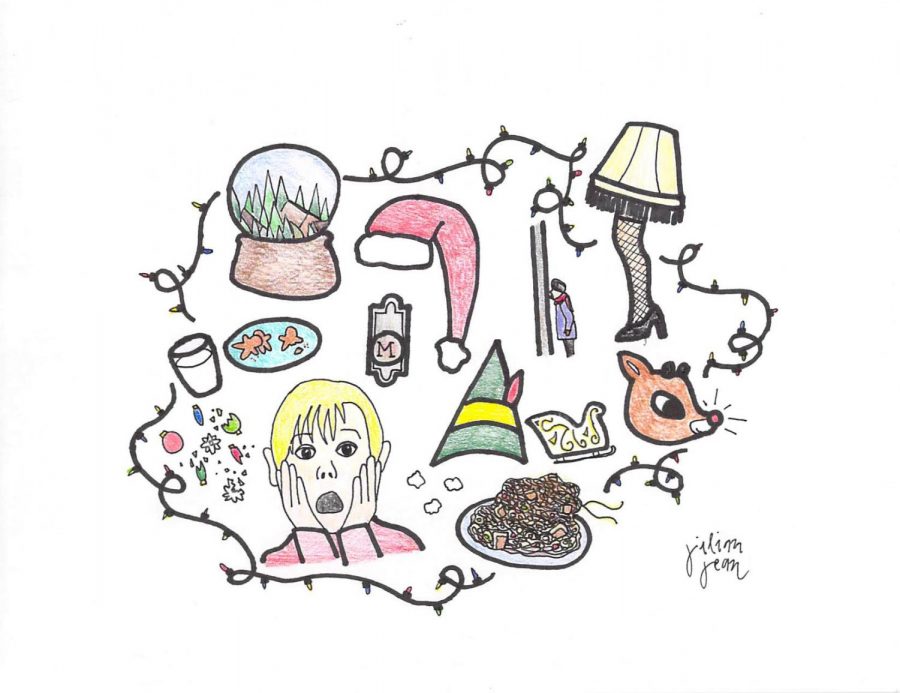 Winter break is here, which means time to watch some classic holiday movies. Here are some of the Messenger’s top picks:

1. Elf, 2003
This funny, classic Christmas movie follows Buddy the Elf, played by Will Ferrell, after he accidentally ends up at the North Pole as a child, where he is raised as an elf. When he grows up, he decides to leave the North Pole because he doesn’t fit in as an elf and decides to go to New York in search of his real father. Buddy doesn’t fit in well with the city, as he doesn’t understand the culture and social norms. He is also still in his elf attire when he arrives. In New York, he finds his father, Walter Hobbs, James Caan, who is a successful businessman that isn’t fond of Buddy. The Hobbs take Buddy in as he gets used to life away from the North Pole. Buddy also meets Jovie, Zooey Deschanel, his love interest. This holiday movie is great for all ages and is sure to put a smile on one’s face with its silly, heartwarming storyline.

2. Home Alone, 1990
Kevin McCallister, Macaulay Culkin, wishes he no longer had his family after he feels tormented and bullied by his family one Christmas. To his surprise, his family is gone the next morning, as they rushed out to the airport for their flight to Paris, accidentally leaving him behind. Kevin does well on his own until he recognizes the fake police officer, who is planning to rob him and his family this holiday. Kevin has to take care of himself and protect the house while his mother tries to get home as soon as she can. This cute movie holds humor, adventure and yet again another heartwarming story, as Kevin learns to truly value his family and get over the silly fears he once had. This movie is part of a three-part series, but the first one is a classic.

3. The Polar Express, 2004
On Christmas Eve, a young boy lies awake wondering whether Santa is real. While trying to go to sleep, he sees a train arrive on his street, the Polar Express. The young boy decides to hop on the train after meeting the conductor, and they continue to pick up passengers on their crazy journey to the North Pole. All the children on the train arrive and meet Santa, and all their doubts about his existence disappear. They also can finally all hear the bell that only those who believe can hear. This movie includes lots of adventure and excitement with a great story for kids. It is moving and can be enjoyed by all during the holiday as a great reminder of childhood and the simpler times in life.

4. Rudolph the Red Nosed Reindeer, 1964
This movie is a childhood classic. While directed mainly towards younger children, this movie can easily be enjoyed by all. The 1964 stop motion animated television special is narrated by Sam the Snowman, Burl Ives, and follows Rudolph, Billie Richards, and his struggles with having a red nose. Rudolph runs away and meets Hermey, an elf voiced by Paul Soles, who ran away because he wants to become a dentist, and Yukon, Larry Mann, who has been looking for silver and gold. They journey off and find the Island of Misfit Toys, which they want to find homes for. This prompts them to try and find Santa to resolve this, and on their way they encounter numerous monsters. The classic story and song is popular this time of year, but the touching movie is a must watch. The stop motion offers nostalgia and the story shares the great moral of accepting everyone because everyone belongs somewhere, as Rudolph and his red nose end up being an important asset to Santa and there is a home for the Misfit Toys. There is sadness, adventure and joy which make this movie another great movie to cuddle up and watch.

5. How the Grinch Stole Christmas, 2000
This movie is based upon Dr. Seuss’ popular children’s book of the same name and follows the Grinch, Jim Carrey, who hates Christmas. He embarks on a journey to Whoville in an attempt to steal the beloved holiday from the Whos. He meets Cindy Lou Who, Taylor Momsen, a little girl from Whoville, who warms his heart and convinces to return all he has stolen, as she tells him the true meaning of Christmas: family and friends not frivolous presents and lights. One can’t forget the Grinch’s cute, sad dog Max or the infamous songs that come with the movie. There is the original 1964 version as well as a recent 2018 animated version. The funny and moving story is another must watch this holiday season with its great reminder of the true meaning of the holidays.