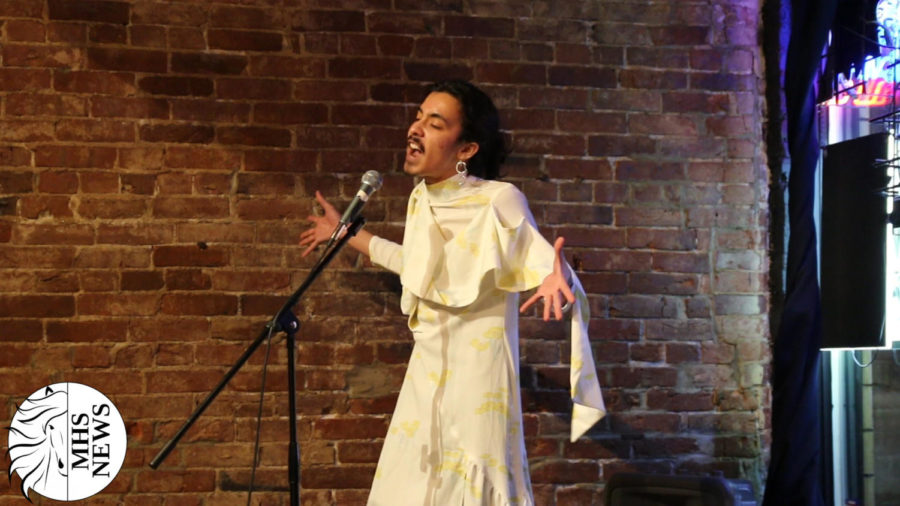 Donning a white dress and knee high black boots with a purse to match, he walks on stage to perform. Cars pass in the window behind him as he positions his hands on his lower abdomen. He begins to read, and the crowd leans in to listen.

They are listening to Zack Lesmeister, 2017 Youth Poet Laureate, performing a set at “Poetry Period,” a Blood Sisters/MHS Poetry Club event where members recited poetry at Foam Coffee and Beer and collected donations. The event raised $285, which will go towards towards buying menstrual products for girls who attend GGIC Haripur, a rural school in Uttarakhand, India.

“I’m really proud of the people behind that project for bringing light to areas where women don’t have access to menstrual care,” Lesmeister said.

Lesmeister is an MHS alum. Since graduating last year, he has taken a semester off from school to focus on personal projects and his growth as a writer.

During 2018, he performed his first out-of-town bookings in Kansas City, filmed and co-directed a project for the Smithsonian Asian Pacific American vimeo, participated in the St. Louis chapter of Brave New Voices and performed in Button Poetry Live events.

But his biggest project is his upcoming book: “Unlearning the Cannon.” The book will include poetry about race, queerness and social issues.

“The cannon in my title refers to the literary canon,” Lesmeister said. “That work is mostly held to a certain standard – all written by old white men.”

Even though the book is completed, he is going through the process of individually submitting each of the poems in the book for publication in different literary outlets. Lesmeister said he is taking this path because it will help his book gain more press attention.

However, he said this process will most likely take a long time to complete, typically around four to six months for just one poem to be published. Because publications, such as Muzzle Magazine and Columbia Journal, receive so many submissions, it takes a long time for them to organize and plan if and when they are going to use each submission.

“I’m confident in my work,” Lesmeister said. “Before I submit to a magazine or journal, I make sure to read a lot of their material to try and get a sense of what kind of poetry they like. Not every magazine is looking for the same thing, a lot of them focus on different central ideas.”

He expects his book to be released in around a year. In the meantime, starting in January Lesmeister will be attending Emerson College in Boston to study creative writing.

“Originally I was planning on releasing it way earlier,” Lesmeister said. “From talking to a few more poets who have done more time in the community, I learned that this is the most efficient way to release a book. Even though it takes a lot of time, it pays off in the long run.”

Lesmeister said preparing his poems for performance has also helped with his written poetry.

“Coming from a performing background has definitely helped,” Lesmeister said. “I’ve tried to write for academia before I got into performance and it was a lot harder because I didn’t really know how to communicate with people, whether that be with an audience right in front of me or someone reading off a page.”

His end goal for his writing is to connect with kids internationally who feel like they they don’t connect with the poetry that they are exposed to in school.

“The reason why I started is because I saw a poem called Buffet Etiquette by Hieu Minh Nguyen,” Lesmeister said. “It drew a connection with me that I’ve never felt with any other writing. Poetry has always been there for underrepresented communities.”