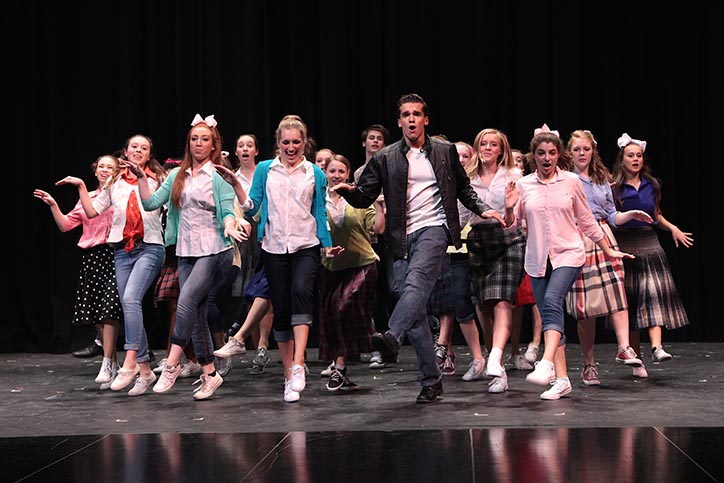 Printed with permission by Sue Lesch

Hot lights. Sweat-soaked costumes. Crowded wings. All are a part of the typical theatre tech week, and MTC’s Bye Bye Birdie is no exception.

Frannie Haller, junior, has been a key component in making sure things run smoothly this week. As the student director, she helps Rebecca Blindauer, theatre teacher and director of the musical, run rehearsals and take notes.

“It’s the final week before the show. It brings the crew and cast together, and everyone puts in their best work,” Haller said.

In order to keep her sanity, Haller incorporates a number of changes into her daily routines.

“Stay calm and do homework ahead of time. Also bring snacks and drink water,” she advised.

Haller also mentioned that overall, tech week for this production was successful.

“There was a dip in the week when two dress rehearsals went poorly, but yesterday’s performance/dress rehearsal for Selvidge went very well,” Haller said.

Another key player in the tech process was Gunnar Boucher, junior. As the stage manager, he is concerned with the logistics and flow of the show.

“During tech week, my biggest concern is making sure all the cues are down and stuck in place for the show. For the most part, it went by smoothly and quickly,” he said.

Because Boucher gets so focused on his work, though, he has to remind himself to take care of his body.

“What I have to have is water. You do so much running around the entire time that you get dehydrated really quickly without even knowing that you haven’t drank anything in the last 12 hours,” he said.

Despite the frustrations that came with putting the performance together with the set and other technological aspects, there are some fun traditions MTC incorporates in order to make rehearsals more light-hearted.

According to Boucher, the company has a set crew hat that gets passed down, along with a tech crew cape. Then, before rehearsals and shows, all the “techies”, the people who do lights, sound, costumes, and set gather for special “techie warmups”.

Boucher said he was extremely happy with the way the show came together.

“I was blown away. I had truly never understood a week of rehearsals and how much could change,” he said.

Taking on a totally different aspect of the musical is Lauren Jenkins, junior. She has a role as a “teen dancer” and has been putting in several hours in hopes of making this show a success.

“Each dress rehearsal has gotten better and better. We have worked really hard to get to where we are and I’m really proud of our cast and crew,” Jenkins said.

According to Jenkins, most of her fun is had behind the scenes with all of her friends.

“It’s so fun to bond with people backstage and in is the dressing rooms. Offstage is where most of our friendships are made, and being able to have such a large community supporting you all the time is such a blessing. It is pretty calm most of the time but sometimes it can get hectic backstage with all of the scene changes and consume changes, but somehow we pull it off,” Jenkins said.

Jenkins has always had confidence in the show’s potential.

“I knew it’d be fine the entire time,” she said.